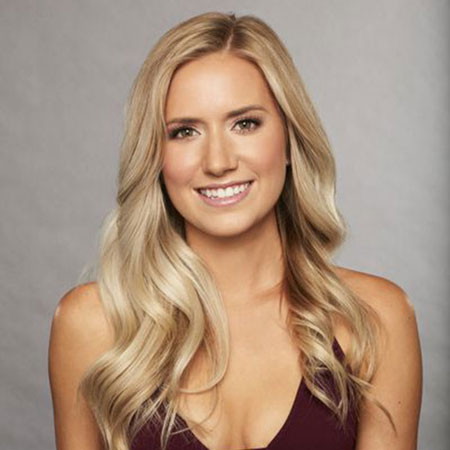 Lauren Burnham is recognized as the contestant of the season 22 of The Bachelor. Before joining the show she worked as a tech salesperson in Virginia Beach. In the recent episode of the series, she got her first one on one date with Arie Luyendyk Jr. in Paris.

The episode also revealed that Burnham was previously engaged to Chris Crane, a pro hockey player. It was reported that she call it quits before the shoot of the reality show started.

Lauren Burnham was born on November 19, 1991, in Virginia Beach, VA under the birth sign Scorpio. She is the only daughter of her parents and has a younger brother, Luke. Burnham is American and belongs to White ethnicity.

Couldn't have asked for a better Dad. Happy Father's Day

In 2011, she graduated from Central Washington University with a degree in Pre-Medicine Studies. She then joined Old Dominion University earning a Bachelor of Science degree in Psychology.

Lauren Burnham worked as a sales intern for Check-6 Inc from 2014-2015. She also worked as an emergency medical technician in Virginia Beach Emergency Medical Services for 3 years. In 2012, she started working as a home health aide giving services like providing home care for a child with special needs, teaching money management, hygiene, exercise practice and being a role model among other responsibilities.

Before participating in The Bachelor, she worked as a sale executive and marketing specialist for Vonage Business and CAVU International respectively.

Burnham rose to fame after she became one of the contestants on the 22nd season of The Bachelor along with Krystal Nielson, Kendall Long, Jacqueline Trumbull, and Rebecca Kufrin among others. This season all the participants competed for the love of Arie Luyendyk Jr., a professional racer and the first runner-up of The Bachelorette season 8.

Lauren Burnham estimated net worth is not public.

As one of the contestants of The Bachelor, she has the chance of winning the prize money of $100,000. According to the records of the show, Emily Maynard was paid the highest winning $250,000 and the lowest-paid winner was Ashely Herbert, $30,000 only.

If Burnham wins the show she will get an expensive customized ring, as per the tradition of the reality show and also the love of Arie Luyuendyk Jr. So far, the most expensive ring in the show cost around $100,000 given by Ben Higgins to Lauren Bushnell during The Bachelor season 20.

Lauren Burnham described herself as an open-minded and loyal person who is fun to hang out. She has a second-degree black belt in Tae Kwon Do and loves the movie Frozen.

Her favorite guilty pleasure TV shows are Botched and Real Housewives. So far in The Bachelor, she has remained off the spotlight. However, in the recent episode, she landed a one on a date in Paris with Arie Luyuendyk Jr., and the pair seems to have good chemistry indeed.

In January 2019, the couple shared the wedding vows and welcomed daughter, Alessi Ren on May 2019.

Teaching @alessiluyendyk to love the outdoors from the verrrry beginning.

But before joining the show, Burnham was reportedly engaged to a hockey player, Chris Crane. The pair were set to marry on July 8, 2017, but they called off the engagement in December 2016.