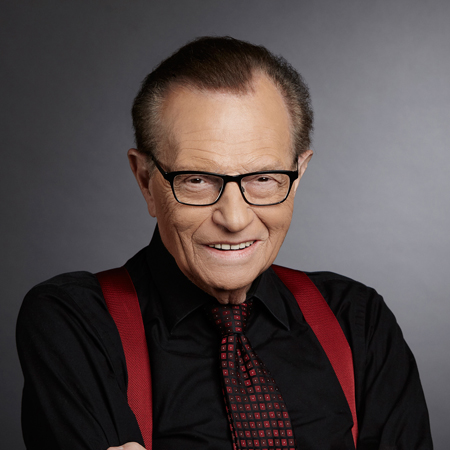 Larry King is most famous for his late-night talks show Larry King Live, which he hosted for 25 years at CNN news source. King is popular for his commendable interviewing style who has interviewed many of the world’s renowned celebrities that many broadcasters could only dream of.

He reshaped the landscape of broadcast journalism when he launched his talk show Larry King Live in June 1985. He has won several awards including two Peabodys and 10 Cable ACE Awards.

He hosts Larry King Now on Hulu and RT America during the week and on hosts Politicking with Larry King- a weekly political talk show which airs in the evening on the same two channels.

Larry King was born on November 19, 1933, and his birth name is Lawrence Harvey Zeiger. His place of birth is Brooklyn, New York, United States of America. He is the son of father Edward Zeiger and mother Jennie Gitlitz.

He was raised in New York along with his parents. His both father name mother were Orthodox Jews. He is white according to his ethnicity. His nationality is American. Larry’s sibling information is not known.

Larry King attended a public high school in the Brooklyn area of New York City Lafayette High School. After his graduation from high school, he started working to support his family.

In the starting days of his career, he worked in Miami where he got his first job in radio. In 1960 after a few years later King hosted Miami Undercover, on WPST-TV Channel 10 (now WPLG). On June 1978, he went national on a nightly Mutual Broadcasting System.

In 1985, he started working in Larry King Live CNN show. He has also presented himself as the writer of a regular newspaper column in USA Today for almost 20 years. And on June 29, 2010, he departed from job hosting Larry King Live from CNN.

King co-founded a production company Ora TV in March 2012. He has also worked in RT, where the network announced King will be anchoring a new talk show on its network. And he worked in the Politicking with Larry King. Larry King is currently one of the most successful host and presenter in the world.

Larry King's Net Worth And Properties

Larry King’s net worth is $150 million, as of 2018. He is one of the richest celebrities in America. He has made a huge fortune with his successful career as a television and radio host. According to some sources, he makes $10K plus for a week from thirty-second ads linked to his videos which have over million views on his several YouTube videos.

He hosted his show Larry King Live from 1985-2010 in CNN network and used to receive $7 million salaries per annum. He earns over $5 million annually from his career. He lives in a lavish mansion in Beverly Hills which cost $12 million. He has a collection of a car of several brands including:

He married high-school sweetheart Freda Miller in 1952 at age 19. That union ended the following year at the behest of their parents, who reportedly had the youngsters' marriage annulled.

King had an affair with Sharon Lepore, Angie Dickinson and Billie Jean King in the past, there is no any updated information relating his dating with these ladies. In 1950, he had an affair with Freda Miller until their separation in 1953.

In 1967 he was married to Alene Akins and they attended divorce in 1972. After his divorce, he was again married to Sharon Lepore in 1976. They shared their relationship for about seven years until 1983.

He was married to Julie Alexander from 1989-1992. He married his seventh wife Shawn South in 1997. The couple married in King's Los Angeles hospital room three days before King underwent heart surgery to clear a clogged blood vessel. They have two children: Chance, born March 1999, and Cannon, born in May 2000.

He has maintained his health in proper condition. His bio is often searched by his fan and he is active in several social sites.