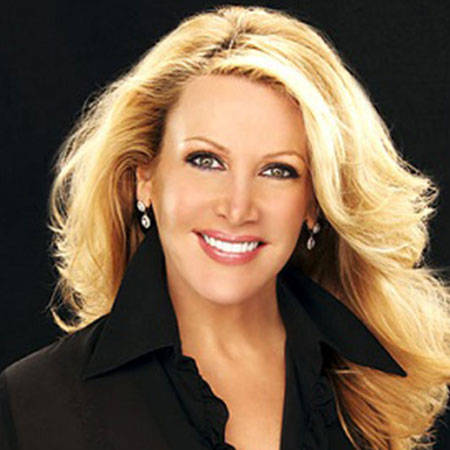 Kymberly Bankier is an American television host, bestselling author, fashion and lifestyle expert. She is known for her appearances on many television shows such as The Ellen DeGeneres Show, The Doctor, and Home & Family. The Beauty Cookbook is one of her best selling books which was published in 2010. She was also a nominee for Emmy Award for her acting in Home and Family.

Kym Douglas aka Kymberly Bankier was born on July 13, 1959, in Michigan, the United State of America under the zodiac sign of Cancer which defines her to be a tenacious, highly imaginative, loyal, emotional personality. She holds an American nationality and her ethnicity of White American.

Bankier has a younger sister but her name has not been revealed to the public yet. She spent her childhood in Michigan and did her schooling there.

She started her career as an intern in the local radio station at an early age of 16 in Southfield. After she completed her education, she started working as a news anchor at WLUC, NBC/Fox-affiliated TV network. After some time, she also started working as an actress and she made her appearance on television series such as The Doctors and The Ellen DeGeneres Show.

She has shared the screen with several popular actors while she worked in the television series which includes the actors like Travis Stork, and Jennifer Aniston.

While working as a television personality, she shared beauty tips and her lifestyles with her fans which made her very famous among the crowd. For her role in the Hallmark Channel show Home and Family, she was nominated for Emmy Awards.

Besides her acting career, she is also an author, and she has published several books in the 2000s. In 2006, she wrote a book titled The Black Book of Hollywood Beauty Secrets which was co-authored by Cindy Pearlman.

In 2009, she published another book The Black Book of Hollywood Pregnancy Secrets along with co-writer Cindy Pearlman. In 2010, she published The Beauty Cookbook which was the bestselling book and one of her most successful books.

Kymberly Bankier's net worth is estimated to be more than $3 million as of 2019. As a successful actor, author and news anchor, she has earned some decent amount of money. She has earned her fortune by appearing on television shows including The Doctors and Home & Family.

The average salary of a TV actor is estimated to be around $44.46 per hours. According to the source, an average salary for the news anchor is $83,300 per year which can range from a minimum of $14,000 to a maximum of $875,000 depending upon their experiences. We can speculate, Bankier has earned a decent sum of money for her appearance in the television series The Doctors and Home & Family for which she was also nominated for the Emmy Awards.

Besides, she has also earned a staggering amount of worth as an author. She has written several popular books and one of her books was the bestselling book of 2010 with which she garnered a good sum of money undoubtedly.

Kymberly Bankier is a married woman who has been married to Jerry Douglas since April 6th, 1985. The adorable couple has spent their 32 years of married life together in which they have also shared a son named Hunter Douglas.

CAPTION: Kymberly Bankier along with her husband Jerry Douglas and her son Hunter Douglas SOURCE: Everipedia

A few years after their marriage, they welcomed their first child, a son, Hunter Douglas. She is also a stepmother of Avra Douglas that her husband has from his previous marriage.

Before she got married to Jerry Douglas, she was in a relationship with Gerald Rubenstein during 1980s but their relationship didn't last for long and broke up in the eighties.

Which Kind Of Cancer She Was Diagnosed With?

On September 4, 2018, she was diagnosed with stage 0(zero) breast cancer. After some days of her diagnosis, the doctor told that her breast cancer stage got leveled up to stage 3 and the tissue was 1.5 cm big.

She later appeared on television show, the Ellen DeGeneres Show where she discussed her diagnosis and difficulties after the diagnosis with the show host Ellen DeGeneres. Ellen in association with Ulta Beauty even helped her with $50,000 during the show which was presented by her son Hunter. Ellen and Ulta have raised over $2.25M in last few years. Meanwhile, her son Hunter and his friends collected around $1,700 to help her with her treatments during Hunter's birthday.

In the video shown below, Kymberly Bankier tells Ellen DeGeneres about her breast cancer battle on her show. In the end, her son Hunter Douglas comes with the Cheque of $50,000 that Ellen and Ulta Beauty donated to her.

You May Also Like James Patterson and Jackie Chan