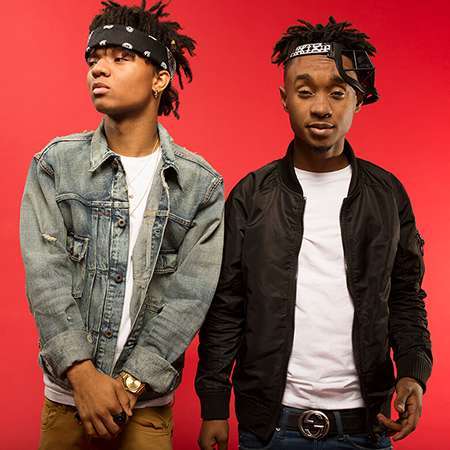 Rae Sremmurd is is a hip-hop duo consisted of two hip-hop artists from Tupelo, Mississippi but is now based in Atlanta. Swae Lee, the first member was born on June 7, 1993, while Slim Jimmy was born on December 29, 1991.They are both of American nationality and African American ethnicity.

Rae Sremmurd is known for their hit singles No flex zone and No type.  Their debut album SremmLife was released on January 6, 2015, and they have earned worldwide recognition with their musical talent. Their musical genres are Hip-hop, Trap, and Pop. Rae Sremmurd's hit single “Black Beatles” was an instant hit around the world.

Both members of Rae Sremmurd worked under the moniker "Dem Outta St8 Boyz" producing music at home and local parties to earn some recognition. They worked very hard to achieve the success they are enjoying now. The band name Rae Sremmurd is generated from the band’s home label EarDrummers which when spelled backward becomes Rae Sremmurd.

They got their first break when they were featured on "Wild Out Wednesday” segment on BET’s hip-hop, and R&B show 106 and Park. After this, they were recognized and signed to the label EarDrummers Entertainment. Both their first and second album made them overnight celebrity with the song Black Beatles from Stremmlife 2, topping the Billboard charts in 2016. Their song Black Beatles became the worldwide unofficial song for the Mannequin Challenge sensation.

In regards to their personal life,  Rae Sremmurd had revealed in an interview that they were homeless before making it to stardom. They credit their fame and success to music producer Mike WiLL Made-It. In another interview, they had disclosed that both of them are actually blood brothers and they feel extremely lucky to enjoy the name and fame together.  Both of the band members are unmarried and not much is known about their girlfriends or affairs.

According to media reports, Rae Sremmurd’s  Swae Lee has been dragged into the spotlight because of his antics time and again. He was blasted on twitter after a woman named Dorothy P on Twitter claimed to have had sex with him. According to another report, Slim Jimmy of Rae Sremmurd claimed to break up with his girlfriends through text messages.

Both Members of Rae Sremmurd are average in height with Swae Lee standing at 5'7 and Slim Jimmy standing at 5'9". They have an athletic physique. As they have been tagged as the future of hip-hop music, they are certain to have an exciting career ahead of them. Their net worth in 2016 is estimated to be around $3 million.

More information in detail about Rae Sremmurd can be found on the internet. We can know more about their life from Wikipedia and also from their own website. They are also active on Facebook and Twitter so their fans and followers can easily follow their online activities.