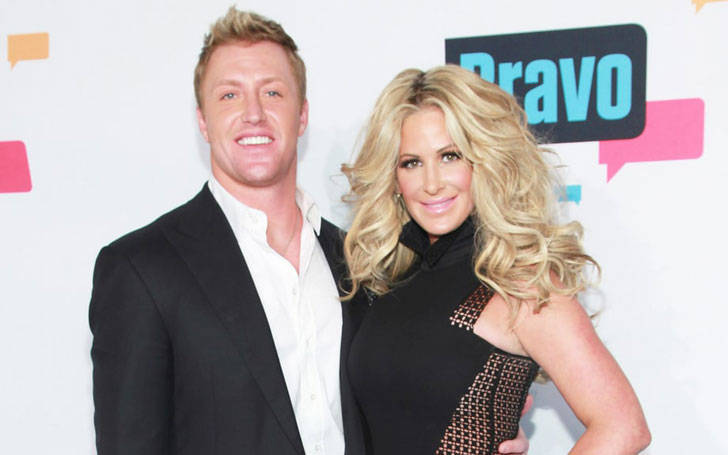 Kim Zolciak is an American television personality who rose to fame after her appearance on the reality television series The Real Housewives of Atlanta aired on the television network, Bravo.

She later appeared on her own show Don’t Be Tardy for the wedding which focused on her wedding and was renewed for the 2nd season as Don’t Be Tardy. She also competed in the 21st season of Dancing with the Stars. She is married to Kroy Biermann.

Kroy Biermann is an American football outside linebacker who played for Atlanta Falcons in the NFL until 2015. He played college football at Montana.

Kim Zolciak was married to Kroy Biermann on 11th November 2011. The wedding took place at home in Roswell, Georgia in the appearance of Kim’s daughter Brielle and Ariana and her son Kroy Jagger. Celebrity blogger Perez Hilton has also appeared in the ceremony. She wore $58,000 gown as a wedding dress bought from PreOwnedWeddingDresses.com.

Kim and Kroy with Kim's daughter on their wedding

Zolciak first met Biermann at an Atlanta fundraiser event in 2010 which was later shown on The Real Housewives of Atlanta. Zolciak was previously married to Dan Toce in 2001.

She divorced Dan Toce in 2003 and later revealed that she is bisexual and was in romantic relation with DJ Tracy Young. She appeared on Dancing with Stars show pairing with Toni Dovolani who is also the dance teacher of Jennifer Lopez.

We did it!! Happiest Day of my life!!! #MrsBiermann

Zolciak has two daughters Brielle and Ariana from her previous relationship. Zolciak and Biermann had a son Kroy Jagger born on 31st May 2011, before their marriage.

They have other three children, Kash Kade and twins, Kaia Rose and Kane Ren. Biermann adopted Zolciak’s daughters and changed their last name to Brielle Biermann and Ariana Biermann which finalized in July 2013.

It has been already five years of Zolciak and Biermann’s marriage but they still appear as the newly married couple. Her daughter filmed a video of her kissing Biermann on the beach not caring about the public on this 4th February. They are currently on their vacation.

She posted the photo of her with her husband on social media with the caption: ‘Kroy burned his scalp wtf!!!!! All that sea bobbin. #ImAllBangedUp. She was in a pink bikini and had shared many other photos and videos.