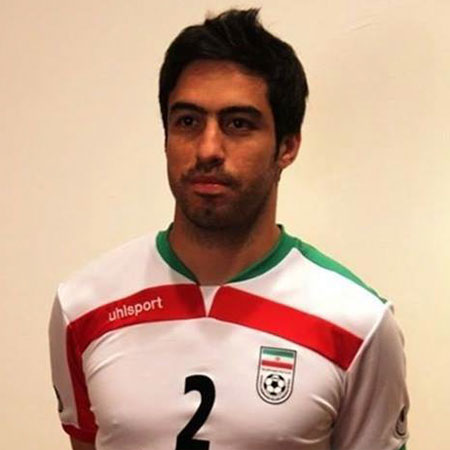 Khosro Heydari is a professional Iranian Footballer. He was born in 14th September in the year of 1983.He was born in Tehran of Iran. He is currently involved as a Iranian National Football Team . His Current Team is Esreghlal FC. He is playing the football in the team as defender. He started playing a professional football from a very early age. He was initially just a local player and he had to make some struggle to make his performance a highlights in various match.

He is an excellent player. He has struggled quite a lot from a local level of football to come to a professional level .He started his career from Pas from where he later got  transferred to another club Esteghlal. He was regarded as one of the versatile player for Esteghlal during the 2008-09 seasons. He gave his total and best performances to the Team until he left the Esteghlal in 2010.He joined to Sepahan in the same year for 2 years contract. Later he joined the Esteghlal again in 2011 after playing a season with the Sepahan. He assisted his team in win Hazfi Cup .Apart from that he also assisted his team in wining the Iran Pro League the next season. In 2013 7th of June he extended his contract by keeping him at the club. He has been a member of Iran National under 23 team .Apart from that he was also been called up as squad on West Asian Football Federation Championship 2007.His first international debut was against Palestine .He also played 2010 Fifa World Cup Qualification and 2014 World Cup Qualification. He was also featured in 2011 Asian Cup Qualification .He will be also featured in 2015 Asia Cup.

There is no such an official records about him regarding marriages or any dating issues. It seems that he doesn’t  like not to reveal his personal life issues to the media .He is not much of attention seeker and thus speaks of only those things that relate to football. There has been few rumors about his marriage but yet they are not revealed by any official information. He is physically fit and is a person with attractive personality .His height is 1.74 m and his weight is 66 kg.

He is one of the popular Iranian Footballer. Out of 331 appearances he has made in his career in club he has already registered 10 goals. He has made around 50 assistance in the game as a total in his whole career in the club .He is one of the player with very bright future and if he continued to play with same level of dedication and skill he is soon going to have a wonderful position in the international football. His total salary is 3 million Dollars annually.