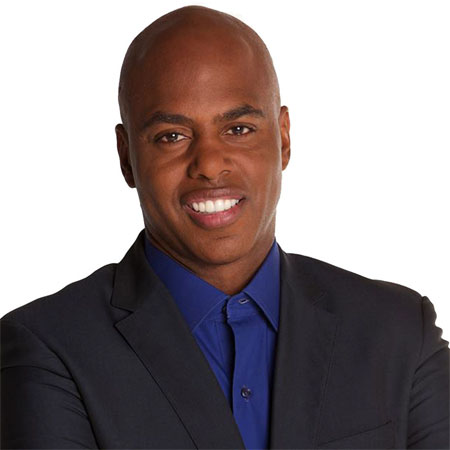 Kevin Frazier is a Television personality who is well known for being the co-host of the Television show Entertainment Tonight. He is also the founder and owner of the leading urban entertainment website HipHollywood.com. Kevin also has appeared on shows including Hell's Kitchen, America's Next Top Model and Flavor of Love Girls: Charm School. Besides, the TV personality also makes an appearance as a guest on  Jim Rome Is Burning.

Kevin Frazier was born as Kevin Timothy Frazier on 20th of May, 1964 in Maryland, United States of America. He is an American by nationality and African American by ethnicity. He was raised by his parents in Maryland. He was very active and enthusiastic since his childhood.

Kevin Frazier became the first-ever to host both Dan Patrick studios on the West and East coasts. He has worked as a play-by-play commentator for the University of Cincinnati Bearcats basketball team from 1993 to 1995. Moreover, he also anchored at Fox 19 in Cincinnati WXIX-TV.

Later, Frazier hosted Sports Center and a multitude of National Basketball Association themed programs like NBA Fastbreak, NBA Shootaround, and NBA Fastbreak Tuesday. He was a correspondent for Entertainment Tonight from the year 2004 to 2011. Besides this, he also co-hosted The Insider from the year 2011 to 2014.

Frazier is also the host of Game Changers on the CBS Dream Team. He was announced as the co-anchor of The Insider by Linda Bell Blue. He co-hosted the show with Lara Spencer.

Frazier also appeared on American Idol. On the Tennis Channel, he hosted Breakfast at the Open for the 2009 U.S Open. In October 2010, he was added to Versus College Football Central studio staff.

In 2013, Frazier was signed to host a game show called The Money Pump. The show was based on Israeli format where contestants had to compete against an enormous money pump for a chance to win the $1 million prize. The show was a huge success.

The net worth of Kevin Frazier is $2 million, according to celebrity net worth, in 2019. The majority of his net worth, Frazier has acc u mulated from his hard work as a host and the founder of HipHollywood.com.

How His Married Life With Yasmin Cader Is Going On?

Kevin Frazier is currently married to Yasmin Cader. They got married on November 2006, at a beautiful wedding ceremony. Now, the couple has two children.

They welcomed their first child a son named Shane Frazier who was born on Monday, February 5th, 2007. Their second child Reece Cader was born on July 5, 2010. He weighed in at 7 lbs. 3 oz. Frazier also has a son, Tony who was born to his previous relationship.

Kevin put the baby for adoption because he was too young to take care of the child. He has been living happily with his wife and his sons. There are no rumors regarding any of his extra-marital affairs after his marriage to Yasmin.

Kevin often posts beautiful photos with wife and children on his social media. He has more than 43.3k followers on his Instagram account.