Kathy Griffin on Trump Scandal: Says Trump is trying to ruin her life and career 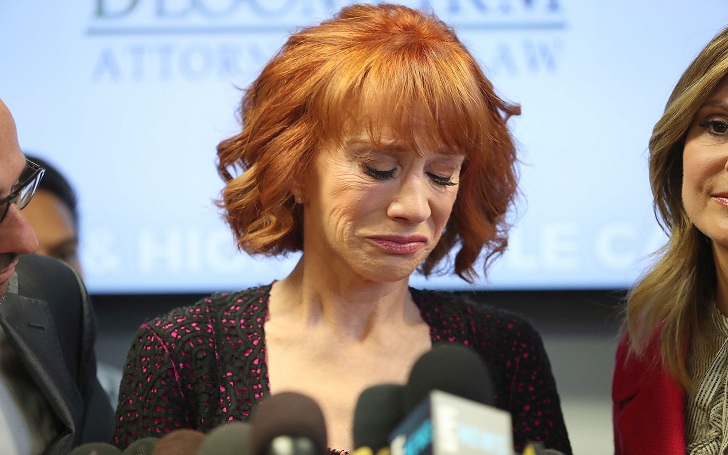 Comedian Kathy Griffin broke down in tears in news meeting the comedian and her attorneys held Friday to talk about the aftermath from the comic posturing with a resemblance of President Donald Trump's disjointed head.

Griffin addressed the antagonism that has been created with Donald Trump and his supporters after the release of the photo and told the reporter that her career and life is over. Furthermore, she even revealed that she has been receiving continuous death threats from Trump and his family.

With her tearful eyes, she said:

What’s happening to me has never happened in this great country. I don’t think I will have a career after this. I am going to be honest, he broke me. He broke me. And then I felt, ‘This isn’t right. This is not right. And I apologized because that was the right thing to do and I meant it.

Lisa Bloom, attorney to Griffin revealed that the comedian was contacted by the U.S. Secret Service and blamed Trump and his family of 'using power to target her' and said:

As a result of the first family bullying her, she has been vilified, getting death threats, fired from multiple jobs and had multiple events canceled.

Griffin even apologized for forgiveness after the photos went viral. As a result, she was dismissed CNN's New Year Eve Program and even lost several endorsements deals with the several companies including Squatty Potty.

The comedian was supported by actor Alec Baldwin who defended her and also spoke against Trump. He said:

No 1 believes u meant 2 threaten Trump. He is such a senile idiot, all he has is Twitter fights. Ignore him. Like the leaders of all the other countries in the world. Ignore him.

He even shared several tweets in favor of her.

Kathy....baby...I've been there.
The whole Henry Hyde thing w Conan, where we bring out an oxygen mask at the end?

2- a joke. That's what I thought. That's what we intended. No one walked out of the studio and said, "No! We're serious!"
No one.

3- but all your gutless, weasels in the GOP insisted that I actually threatened Hyde. They played the victim beautifully.