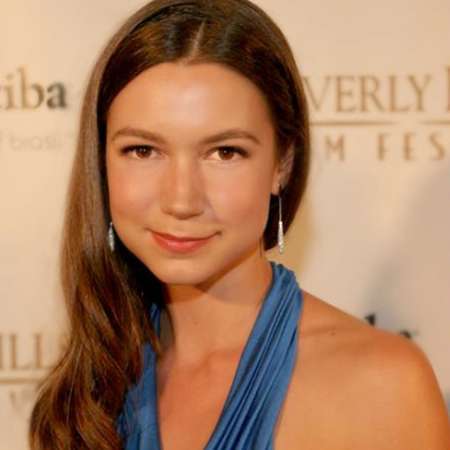 An English actress/director, Kate Maberly, is known for appearing in the various movies and TV series. She debuted her movie debut with the 1993 film The Secret Garden. Her acting in the movie is highly appreciated by many fans and critics. Besides, movies and TV series, she has also worked in several theater plays and radio shows.

Kate Maberly was born Kate Elizabeth Cameron Maberly to the father who was a lawyer on 14 March 1982 in Reigate, the United Kingdom under the birth sign Pisces. Kate is of Caucasian ethnicity and belongs to British nationality.

She spent most of her childhood days with her siblings, two older brothers, Thomas Maberly & Guy Maberly, one younger brother, Jack Maberly and an older sister, Polly Maberly who is an actress.

Regarding her academics, Maberly attended Dunottar School based in Reigate where she skipped a year ahead and graduated with A-levels in Chemistry, History, Music, and Math.

From a very early age, she was interested in sports. At a small age of 5, Maberly was on the swimming team and became country champion swimmer when she reached 16. She raised money for St Piers Lingfield, a school to help children with Epilepsy after she completed the BT National Swimathon at 9.

Maberly then went on to play tennis and represented her country. From 2004 to 2010, she played for the Royal Parks Tennis League. Moreover, she also played piano from the age of 6. When she was 14, she traveled to several places and countries with Dunottar Chamber Ensemble in order to perform the solo piano.

Besides, she went on to graduate from London's Trinity College of Music in 2004 with a joint honors degree in cello and piano performance.

Kate Maberly came into the limelight after being starred as a child artist in the role of Mary Lennox in the 1993 movie, The Secret Garden. The movie starred Heydon Prowse, Andrew Knott, and John Lynch. The film achieved international acclaim and has gone on to become a family classic.

CAPTION: Kate Maberly in one of the scenes of The Secret Garden. SOURCE: HuffPost

Since then she has been featured in movies like Finding Neverland as character Wendy Darling, Like Minds as Susan Mueller, Boogeyman 3, The Ghastly Love of Johnny X, Standing up and more. In 2004's movie Finding Neverland, she starred with Johnny Depp, Kate Winslet, Radha Mitchell, and Dustin Hoffman.

In 2015, she made her debut as a writer, director, and producer from the movie, Charlie's Supersonic Glider. As of 2018, she again wrote, direct and produced another movie, The Forest of Hands and Teeth based on the novel of Carrie Ryan.

Furthermore, she has also appeared in the TV series. She made her debut in TV in 1991 as Christine in the BBC's TV anthology drama series  Screen One where she shared the screen with Julie Walters, Victoria Wood, Iain Glen, and Lauren Bacall.

Some of her other works include The Langoliers, Gulliver’s Travels and  Screen Two. For her exceptional work in acting, she has won awards like Audie Award and a special award for The London Film Critics Circle. Besides, she also worked in several theater plays and radio shows.

Kate Maberly's net worth is estimated to be a total of $5 million. She has had a wonderful career in the acting arena. She has achieved a lot over the years. Her as per some online sources, however, the amount is still under review.

Maberly earns much from her acting career. According to some sources, a TV star averagely makes a salary that ranges from $150k to $1 million.

She has appeared in the movies and TV shows such as Standing Up, Boogeyman 3, Popcorn, Like Minds, Finding Neverland, The Audition, The Booth at the End, Daniel Deronda, A Touch of Frost, Midsomer Murder, Victoria & Albert, and The Last of the Blonde Bombshells.

In addition to her work on screen Kate has performed voice-overs for Ordynek, Bringing the Pride of Poland to Texas in 2000 and for The Braniff Pages in 2001. She has completed several radio works for BBC Radio 4, including The Dorabella Variation, A Certain Smile, and National Velvet.

Kate Maberly is currently unmarried and has no children yet. She is not dating anyone currently (publicly). She is not spotted with any men in the public and has not introduced anyone as her boyfriend. In many of her interviews, she talks mostly about her career rather than her relationship status.

The talented and young actress and musician, Maberly have a hand full of work. She is hardworking and ambitious which might be the reason for giving first priority to her works rather than involving in any serious relationships. As of 2018, she might be possibly single.

Check out the interview with Kate Maberly: