Malina Weissman is a child actress best known for portraying Violet Baudelaire in the Netflix series A Series of Unfortunate Events and young April O'Neil in the movie Teenage Mutant Ninja Turtles. Moreover, she is a model working with renowned brands such as Calvin Klein and Ralph Lauren.

Meanwhile, Malina's display of affection towards her family members on social media just goes to show she's been blessed with a beautiful family. Let's get more details of her parents and siblings.

Malina Weissman was born on 12th March 2003 in New York City. There is not much information about her family except she resides with her parents and her sister Ayla Weissman who is quite popular on Instagram. Ayla often posts fashion, lifestyle, and selfie photos to her account.

Malina's mother is a former model. She followed her mother's footsteps by entering the modeling industry when she was just eight years old. Moreover, she signed a contract with the same agency her mother worked for. Impressively, this talented girl has modeled for various famous brands. Malina loves to express her affection towards her parents and sister through social media. She wished her mother a 'Happy Mother’s Day' back in May 2017 through a heartwarming picture on Instagram.

Happy Mother's Day  I love you so much mama

Similarly, a month later on 19th June, Malina wished her father a 'Happy Father’s Day'. She captioned it "Happy Father's Day to the coolest dad ever  Love you so much".

On 12th March 2018, Malina celebrated herself and her sister’s birthday in an exceptional manner revealing the fact that the sisters share the same birthday, born just three years apart.

This gorgeous girl shared some childhood pictures of them, captioning it "March 12th, 2000 and 2003. Born on the same day different years. Happy birthday to the best sister ever. I love you so much".

It's quite clear that Malina doesn't shy away from displaying her love towards her amazing family on social media. The love and affection among them couldn't be purer.

Malina Weissman remarkably displayed interests in the fashion and movie world when she was just 2 years old. By the time Malina was 8, she had already signed her first modeling contract. 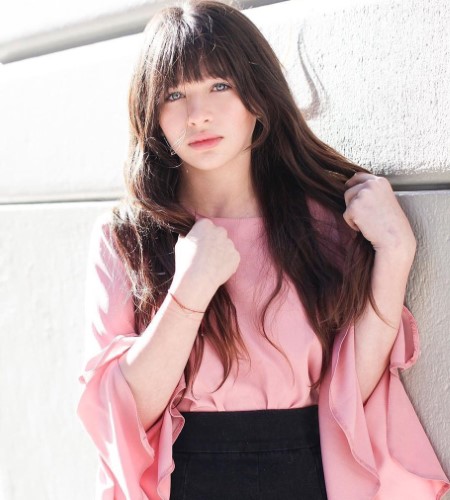 Weissman soon began to appear in movies. Her first appearance as a  child actress was in the 2014 Teenage Mutant Ninja Turtles where she played the role of young April O’Neil.

Later, she featured in the 2016 Supergirl series, portraying the role of young Kara Zor-El. Moreover, in 2017, she gained even more fame through the Netflix series, A Series of Unfortunate Events.

Malina played the character Violet Baudelaire who is the eldest child of the Baudelaire family and an inventor skilled in mechanics. This gorgeous girl managed to appeal to the audience of the TV series with her outstanding presentation of the character.

For @coveteur Check out my interview at coveteur.com

Malina is a lover of books who has expressed her joy in wandering into the world of books in her leisure time. No wonder she amazingly provides life to the book character she plays on the Netflix series.

The rising star has been claimed to share a resemblance with Alias star, Jennifer Garner. Both of them starred together in the movie Nine Lives.