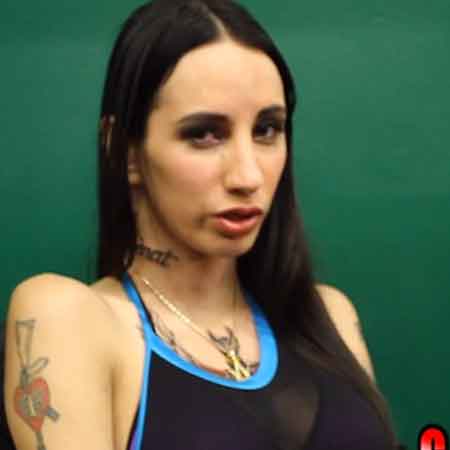 Kat Stacks is a Venezuelan born American rapper, record artist and a blogger. She is mostly known for her controversial relationship with many prominent hip-hop artists like Soulja Boy, Gucci Mane, and Lil Wayne. Besides being a music artist and sex-worker, Stacks is also an author who has written a bestseller "Becoming Kat Stacks."

Kat Stacks was born Andrea Herrera on 2nd November in 1989. Her parents were illegal immigrants from Venezuela so Stacks has kept the information about her parents under the radar. Although she belongs to Venezuela, she holds an American nationality while her ethnicity is mixed.

Kat Stacks had a very rough childhood being migrated illegally to the United States with her parents. She relocated to the United States when she was 8 years old. Due to some family conditions, she was unable to attend school in her childhood which she described in an interview. She said she was somehow ignored by her working-class parents which mislead her to the wrong path. She started working as an adult actress since an early age of 14, which was due to her relationship with a man, who apparently was a pimp.

Starting from her early childhood, Stacks got involved in sex working and she has worked as a sex worker for the most part of her life. But she now claims she has left her past life behind and started a new journey of music artist. During her early days, she stirred a lot of controversies for her relationship with many hip-hop artists including Nelly and Bow Wow.

Stacks even leaked her own sex tapes. Teamed with WorldStarHipHop, Stacks released some explicit videos, which revealed the bed secrets of many hip-hop artists and rappers. She is often referred to as the second Karine Steffans, a former groupie. She had a huge success on the internet as most of her clients were famous rappers like Lil Wayne, Soulja Boy, Gucci Mane and other small artists of the Cash Money crew.

Due to her nature for raising controversies and rumors, Kat Stacks received orders for her deportation, owing to which she has joined an organization called DREAM Act, who works for the rights of undocumented illegal immigrants who were once brought to the United States as a child.

Kat Stacks is also an author and has written a book titled Becoming Kat Stacks, where she spills the beans regarding her life as a sex worker. The book was published in November under Worldstar Publishing, LLC.

Kat Stacks has an estimated net worth of $200,000 which she earned mostly from her works with WorldStarHipHop and from her videos on YouTube. Her book was also well received by the general mass and had a pretty good sale, which is all part of her current net worth. She has also been in a few concerts in her lifetime, from where she might have received a decent amount for her performance.

Kat Stacks isn't married but she has a son named TJ, from her previous relationship with her pimp. She gave birth to her son when she was 19 years of age, and raised the little kid as a single mother.

Stacks claism that she started dating at the age of 14. She gained public attention following her pregnancy at the age of 19. She never confirmed her child's father's name but a lot of people believed Prince was the father. She has no boyfriends as of 2019.

Stacks claims she has had relationships with several popular rappers and celebrities like Soulja Boy, Yung Maserati, Kimrick Lewis, Gucci Mane, Marcus Gilbert, and Lil Wayne, however, the rappers never confirmed their relationship with Stacks.

Stacks was also rumored to dating Shanod Johnson, the owner and promoter of HNIC entertainments after she uploaded an image of her with Johnson on her social media. But neither Stacks nor Johnson addressed the rumor.