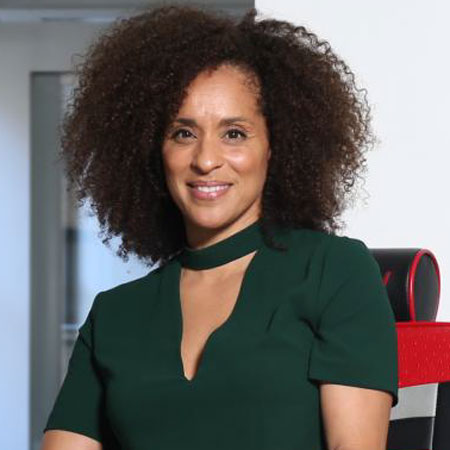 Karyn Parsons is an American former actress, known for her portrayal, Hilary Banks in an American sitcom, The Fresh Prince of Bel-Air along with Will Smith, Alfonso Ribeiro, and some others. She also starred in 1995 American military comedy film, Major Payne.

Parsons was first married to American actor, Randy Brooks. Following their divorce, she married director as well as a producer, Alexandre Rockwell and together they have two children.

Karyn Parsons was born on 8th October 1966 in Los Angeles, California, U.S. She has a mixed ethnical background and holds an American nationality.

Karyn Parsons began her career as a model but later turned to act. In the late 90s, she appeared in guest-starring roles on TV shows, "Hunter," "The Bronx Zoo," and "CBS Summer Playhouse."

Karyn’s next appearance on the television screen was in 1988; portraying Lynette in an American anthology series, CBS Summer Playhouse. In 1990, she shared the screen with Will Smith's cousin, Hilary Banks in the NBC sitcom, “The Fresh Prince of Bel-Air.”

Later, Parsons appeared in numerous movies and television shows including, Blossom, Out All Night, Mixing Nia and many others. In 1996, she was cast in the American sitcom, Lush Life in the lead role of Margot Hines. She also co-wrote, produced and created the show.

Parsons has played in the several movies, Late Nights, Major Payne and The Ladies Man; however, her last notable appearances was in 2002 comedy-drama film, 13 Moons as Lily. Since then, she has appeared only a few times on television.

Karyn Parsons has appeared in several TV series and movies which largely makes her net worth look good. As of 2017, her total net worth is around $1.5 million.

She became a household name when she was cast as Hilary Banks on the hit comedy, "The Fresh Prince of Bel-Air". She co-starred on the show until its run ended in 1996.

In addition to her work on "The Fresh Prince…", she also appeared in such films as, "Major Payne", "Mixing Nia", and "The Ladies Man", and in guest-starring roles on such television shows as, "Blossom", "The John Larroquette Show", and "Melrose Place".

According to some sources, in March of 2008, she purchased a 4BHK, 2722sq ft. Home in Los Angeles, California, U.S. Her famous movie, Major Payne made a box office collection $30.1 million, and IMDB rated the film 6.2.

Karyn Parsons married twice in her life. She first married to American film & TV actor, Randy Brooks, known for her role in the movie, Reservoir Dogs. However, the duo divorced in the 90’s.

Besides, Parsons Enjoys dancing, fencing & horseback. She has a good bonding with her co-star, Wills Smith.