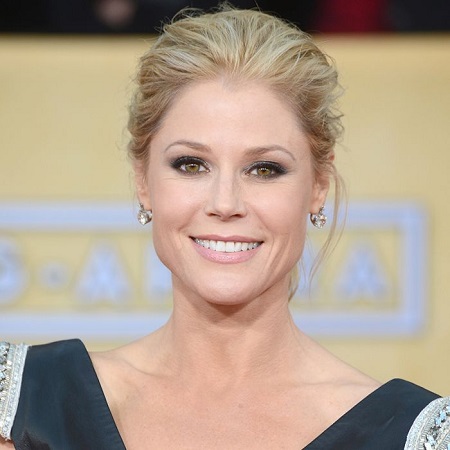 Julie Bowen Luetkemeyer aka Julie Bowen is an American actress and model, best known for her role Aunt Gwen in the series Dawson's Creek. She also grabbed the limelight for her works in the series and movies such as Ed, Denise Bauer, Boston Legal, Modern Family, Happy Gilmore, Kids in America, and  Jumping the Broom.

Julie Brown was born on 3rd March 1970 in Baltimore, Maryland, the U.S. under the birth sign Pisces. She holds American nationality and belongs to white ethnicity.

The name of her parents is Suzanne Frey (mother) and John Alexander Luetkemeyer, Jr (father). Bowen spent her childhood days with her two siblings sisters; Molly Luetkemeyer, and Annie Luetkemeyer.

Talking about her academic qualification, she is a graduate of Brown University, majoring in Italian Renaissance studies. Likewise, she also studied acting at the Actor's Institute.

Julie Bowen started her career in the acting industry during her college days. She appeared in the videos, films, and plays like Guys and Dolls, Stage Door, and Lemon Sky. Before completing her graduation, she appeared as a lead in the independent movie Five Spot Jewel.

After that, she featured in the soap opera Loving in 1992. A year later, Julie appeared in an episode of the drama series Cla s s of '96. Additionally, she is also a part of the television shows like Runaway Daughters, Extreme, Strange Luck, Justice League, Lost, Law & Order: Special Victims Unit, and many others.

Since her debut, she has shared her screen with the stars like Holly Fields, Jenny Lewis, Paul Rudd, Sarah Hyland, Tony Shalhoub, Traylor Howard, and Chris Young.

Furthermore, she has also appeared in the movie such as Multiplicity, Kids in America, Crazy on the Outside, Jumping the Broom, Conception, Knife Fight,  Scooby-Doo! Mecha Mutt Menace, Planes: Fire & Rescue, and Life of the Party.

Julie Bowen's net worth is reported to be around $18 million as of 2019, July according to the Celebrity NetWorth. She earns a huge amount of salary and decent fortunes from her career.

Julie Bowen was once a married woman. She got married to Scott Phillips in 2004, September 9. Her spouse is a real estate investor and software developer. The couple shared a healthy relationship for nearly fourteen years.

A perfect birthday! Thanks to my sweet boys…

The couple welcomed three children together; Oliver McLanahan Phillips, John Phillips, and Gustav Phillips. Despite being married for fourteen years, the duo separated in February 2018. Their divorce was finalized on 13th September 2018.

As per various resources, Phillips is reported to take $12.3 million worth of their a s sets from the marriage, whereas, Julie will receive $13 million.

Similarly, Scott will take $5.4 million marital home, and Julie gets to keep her Los Angeles based home, which is worth $3.1 million. Regarding their bank accounts, Scott gets to save $1.3 million and the other worth $2.5 million to himself.