Julianne Moore's Married Life With Husband Bart Freundlich, Is Everything Okay? Details About Their Children and Early Years! 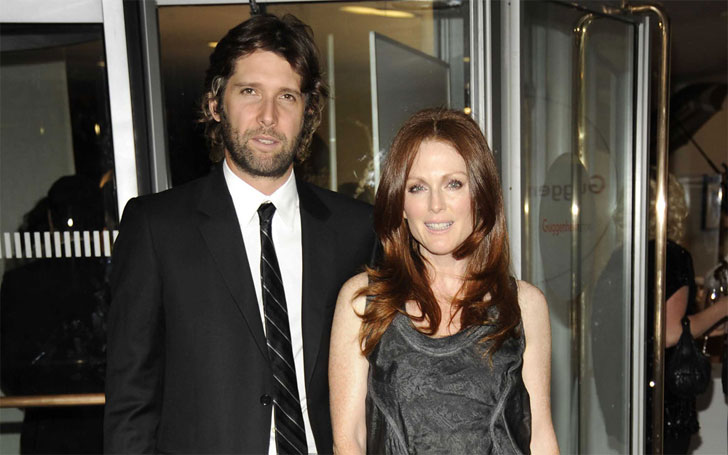 Julianne Moore might be a mega Hollywood star, but she is just like everybody else! She is a happily married woman who loves flaunting pictures of her husband and children on her social media.

The Still Alice actress has an  Academy Award, two Golden Globe Awards, two SAG Awards, and nominations for several awards, but for her, her family still outweighs it all.

Moore is also a notable children’s author who has published seven children’s storybooks. And today we are discussing her more personal side-married life, children and life away from the media and red carpets.

The Crazy Stupid Love star has gone through many ups and downs in her life. First, she was married to stage director John Gould Rubin from 1986 to 1995.

Julianne Moore with her Family; husband and children

The couple dated almost seven years before getting married, Julianne Moore and Bart Freundlich got married in August 2003 at a grand ceremony in Greenwich Village, New York City.

Moore and Freundlich are living a happily married life with their two children, and unlike with other Hollywood couples, there has been no divorce rumors here.

Together for 21 years and counting, the couple is still romancing hard! Julianne and Bart are so cute when in vacations; you have to see the pictures to believe!

Julianne Moore vacationing with her family in Mexico

In September 2017, Moore vacationed in Venice, Italy with her husband, Bart. On that trip, she also attended 2017’s edition of Venice Film Festival where she looked stunning on the red carpet in a red dress.

And it just happened to rain during the red carpet event, guess what happened then? Her Husband Bart Freundlich came up with an umbrella, sweetest thing ever or what?

During the same trip, Moore also did a bit promotion of her upcoming movie Suburbicon- directed by George Clooney, and it will be in theater from October 27, 2017.

The movie will feature Julianne Moore, Matt Damon, Oscar Isaac and Glenn Flesher in the lead roles. Talk about being hard working and versatile!

The Don Jon star Julianne Moore has two children with her husband, Bart Freundlich. They welcomed their two kids before getting married.

Moore and Freundlich had their first child, a son named Caleb in December 1997. And four years later, Moore gave birth to their second child, a daughter named Liv.

Julianne Moore with her husband and children, Source: people

Julianne and Freundlich’s felt their family was complete after the birth of their second child. Currently, the family of four lives in a New York City townhouse. Moore has quite the love for her youngsters; she frequently shares their pictures on Instagram.

Julianne met stage director John Gould Rubin in 1984 while performing in a Broadway show. Laws of physics and attractions came into play, and they started dating the same year. After dating for two years, Julianne Moore and John Gould got married In 1986.

Unfortunately, after seven years of their marriage, they started living separately, and their divorce was finalized in August 1995.

Talking about the divorce Moore has said that she got married the first time at a young age which caused various problems in her marriage.

However, the divorce seems like it was all for good, as Julianne is now happier than ever in life. Two children and marriage with a man she has loved for over two decades, we hope she is more content than ever!