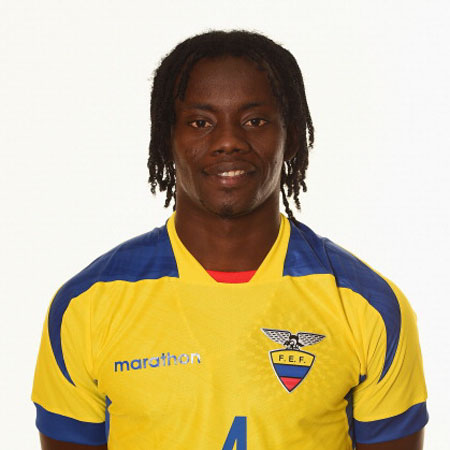 Barcelona football player, Juan Carlos Paredes Reasco is known best for his speed and agility. Belonging to the nation of Ecuador, this black player currently plays in the positions of defender, midfielder, wing back, full back and winger and is best known as defender No.4. At a young age of 26, Juan has accumulated a huge fan following and continues to impress football fans with his skills.

Paredes was born on July 8, 1987 in Esmeraldas, Ecuador. His career started after he started playing professionally for Deportivo Cuenca in 2006. A year later, he signed a contract with Guayaquil’s Barcelona and played for the team till 2007. He appeared in five matches with zero goals. Juan next joined the Rocafuerte FC of Ecuador’s third division and appeared in twenty nine of its matches with eleven total goals. By the time he left the team, he had a significant hand in promoting the team into the second division for the 2008-2009 seasons. This achievement is what increased his worth has an established football player and he was signed back to Deportivo Cuenca for its copa libertadores campaign. He played thirty two matches for the team with a total of 3 goals. In 2010, Juan signed a contract with the Deportivo Quito for which he played a total of ninety five matches and seven goals.

As of 2013-2014, Juan’s current team is Guayaquil’s Barcelona for which he has played thirty five matches with one goal in total. His national team debut was for Ecuador against Mexico whereby Ecuador wrapped up by a 2-1 win. Juan managed a goal each in the 2011 Apertura and the 2011 Finales Del Campeonato which are considered to be his achievements.

Juan’s personal life is not much hyped up and his marital status and rumors are very less talked about. However his playing skills compensate very well for the loss in his personal life information across social media. His attack technique has been given a score of 69 and defense and header accuracy are both marked 68. Juan’s strong foot is his right one and his weak foot frequency and accuracy are marked 4. His short pass speed and accuracy are marked 76, long pass accuracy is marked 82 and long pass speed is marked 79. His shot accuracy is 70, place kicking is 65, swerve is 84, ball control is 89 and goal keeping skills are 50 according to the available statistics. Also his speed response, explosive power and dribble speed are marked 77, 80 and 85 respectively with a top speed of 90. Juan’s body balance is marked 76, stamina 85, kicking power 83, jump 73, attack awareness 3 and defense awareness 2. From the available markings, it is evident that his speed and agility are his strongest points. His attack work rate is also high but his defense work rate is low.

Juan’s current salary is unknown but his net worth is supposed to be a whopping $1.23 million. Juan’s height is 1.74m and his weight is 72 kg. Paredes is his shirt name and the shirt number is 4. His social engagement and activity is lesser in comparison to other football players.

At a very young age, Paredes has managed to make a mark upon the football fraternity and it is certain that a lot more is to be expected in the near future from him.