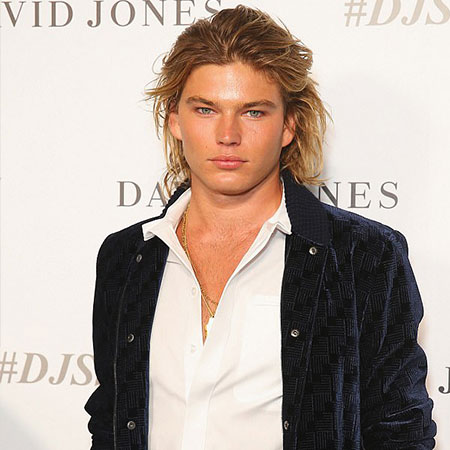 Australian model Jordan Kale Barrett came into the limelight after the Models.com selected him as the “Model of the Year” in 2016. Within some years of his modeling career, Barrett has earned several honors including “Man Of Style” award at The GQ.

Jordan Barrett was born Jordan Kale Barrett on December 2, 1996, in Byron Bay, New South Wales, Australia. He was born to father Adrian Barrett and mother Julie Barrett. His father, Adrian was a convicted drug dealer; in 2013, Adrian, then-54 along with his accomplice Allison Cale, then-34 was sentenced to eight years in prison after being proven guilty of eight drug-related offenses.

Barrett is a Sagittarius which defines his characters like optimistic, straightforward, intelligent, philosophical, and adventurous.

When he was only 14, the IMG Australia, a modeling scout scouted him. Later, he started his career when he was 17. The aspiring model Barrett has been secretive regarding his educational background. He holds an Australian nationality and belongs to the mixed ethnic group.

Jordan Barrett’s career started taking shape after he was discovered by the international modeling scouting agency IMG. At that time, he was only 14 and was caught stealing matches from a convenience store. Later he reminisced the incident during an interview with Vanity Fair.

Talking to the New York Magazine, Jordan said he wanted to have a cigarette, however, he was unable to get a lighter as he was underage. He added, “so I decided I was gonna take matches from the counter.”

He kicked off his modeling career at 17 where his first job was in Tokyo, Japan, but it was only a year after he officially signed with IMG.

Barrett appeared in the campaigns for Tom Ford, Versace, Moschino, Balmain as well as Coach. Further, he has also been featured in the covers of several magazines including Vogue Netherlands Man, The London Times, and Wonderland Magazine. As of now, Jordan is a model of the new 1 Million Fragrance Spot.

Jordan Barrett was named Models of the Year by the Models.com in 2016 whereas Vogue named him the Model It Boy of the new Era. Moreover, he received the Man of Style award at The GQ Awards.

Jordan Barrett’s Net Worth And Earnings

The Australia born 22-year-old model has already established him as one of the finest emerging models in the world. He has worked for several renowned international magazines and worked for many modeling agencies. No doubt he earns a decent sum of money from his career, however, as of now, his exact net worth and earnings are not revealed.

Looking at his proficiency and skill, Barrett is estimated to possess a net worth that ranges in $thousands. According to the Paysa.com, an average model earns around $51,000 annually, but the amount may vary according to their work excellency, demand and experience.

The Australian heartthrob, who often gets compared to a young Leonardo DiCaprio, is not known to have any girlfriend at present. He might be focused on his modeling career at present. But he was rumored to be in a relationship with several celebrities and model in the past.

In his initial days, he was rumored to be dating Paris Hilton after the pair was spotted getting cozy at the Cavalli Club in Milan, Italy. In January 2015, Barrett shut down the rumors. Later in May 2016, he was spotted holding hands with the then 32-year-old model Lara Stone when they left a Vogue party in Kensington Gardens, London. They were seen all over each other while partying in Cannes where Barrett was captured planting a kiss on Stone. Several tabloids confirmed them as a couple, however, they never addressed the news.

In 2017, Barrett was speculated to be dating Hailey Baldwin. The couple met for the first time at the Moschino Fashion Show in June 2016. Several media claimed the pair to be dating after they got amorous at the function.