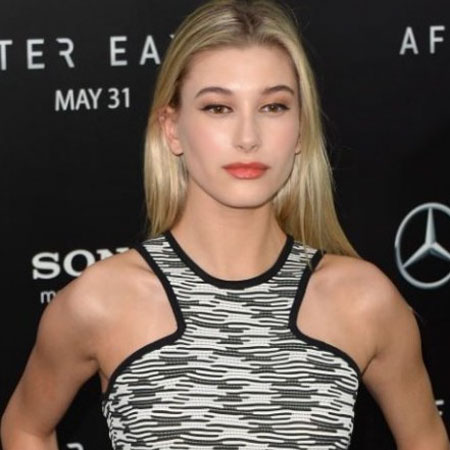 American model, Hailey Baldwin is the daughter of famous American actor, Stephen Baldwin, and the niece of comedian, Alec Baldwin. She started her modeling since her early age and has created a notable impression after walking on the ramp at the London Fashion Week.

Hailey Rhode Baldwin was born on 22 November 1996, in Tucson, Arizona. She belongs to White-American ethnicity/race and holds American nationality.

Baldwin is the daughter born to Kennya Deodato, a graphic designer, and Stephen Baldwin, a well-known American actor. She has an elder sister, Alaia Baldwin, born in 1993. Baldwin’s heritage consists of Brazilian, Italian, Portuguese, English and German descent.

As a child, Baldwin was homeschooled because of her parent's busy schedule. Later, she went to Eastern Christian School Association. Since her early years, she was a pa s sionate dancer and also took cla s sical ballet lessons.

Hailey Baldwin began her career with the New York modeling agency, Ford Models. She went on to feature in several popular magazines like Tatler,’ ‘LOVE,’ ‘V’ and ‘i-D.’

In 2014, Baldwin landed her first major gig for French Connection Clothing. The following year in December, she did a photo-session for the Love magazine.

In 2015, Baldwin did a photo shoot for American fashion and lifestyle magazine, Vogue. She was also photographed for ‘Teen Vogue.’ The following April, she was photographed for her first magazine cover for Jalousie Magazine with Lucky Blue Smith.

The same month, Baldwin was also photographed for two other magazine covers, ‘Wonderland Magazine,’ and ‘L’Officiel Magazine.’ She was also seen in a Ralph Lauren's commercial alongside Australian singer, Cody Simpson.

The following October, Baldwin walked on the runway for the Tommy Hilfiger Corporation and Philipp Plein, a German fashion designer. She also signed with the well-known modeling agency, Heroes Models in 2015.

In January 2016, Baldwin also did an editorial shooting for the ‘Vogue’ magazine’s Korean edition alongside the Ralph Lauren campaign. Following February, she again walked the ramp for Tommy Hilfiger.

In 2016, Baldwin signed to ‘IMG Models,’ a high-profile modeling agency. In May, she featured on the cover of international magazine ‘Marie Claire.’ The following year, she appeared in some other magazines, including Glamour Magazine and ES Magazine.

Baldwin appeared in the campaign for Guess holiday collection, and also for the popular Australian brand, Sa s s & Bide. She also featured in an edition of a popular Australian magazine, ‘Harper’s Bazaar’ and the French magazine ‘Elle.’

Besides, Baldwin has also made a few appearances on television. She made a cameo performance on the show ‘Saturday Night Live’ in 2009.

Baldwin also appeared in the MTV Europe Music Awards as a TV host, which was held in Milan, Italy. She has also played two popular music videos.

In the year 2011, Baldwin appeared on the music video of the song ‘On My Mind’ as the love interest, composed by popular Australian singer Cody Simpson.

In 2016, Baldwin played a role in a music video titled ‘Love To Love You Baby’ of French model and singer Baptiste Giabiconi.

Hailey Rhode Baldwin is possibly single at the moment. Previously, she had a romantic relationship with Canadian singer, Justin Bieber. The pair was first linked in early 2016 and were often spotted together since.

Her affair with Bieber became the headlines during the time and earned her popularity as well. Baldwin was accused of having plastic surgery with an aesthetic aim in late 2016. However, she denied all the allegations and defended herself saying:

“My face has just matured. I grew into my looks. I do look different than I did when I was younger, but it's still the same face,"

Baldwin shares a good bond with Jenner sisters; Kylie Jenner and Kendall Jenner. Besides, she is also a good friend of Jaden Smith and Willow Smith.

Baldwin usually prefers to share quotations from the Bible on her social sites. She was raised as an Evangelical Christian. She once said:

"I was raised in the church. I was brought up in that life, and I think that it's very important for everybody to be in touch with their spirituality and to have a relationship with God. Not everybody is going to believe in the God that I believe in, but it's something that I'm not afraid to share with people because I know how it inspires me – how it positively affects my life I think that God kind of put me in the place in my life to not be quiet about it, not be quiet about him, but to reach people and to inspire people."

Baldwin is a huge fan of Hollywood star, Leonardo DiCaprio. She got a chance to meet him at Met Gala after-party.

Hailey Baldwin, 21, is a rising American model. Her estimated net worth is around $3 million as per some online sources.

Baldwin gets a handsome sum for her modeling works. Her monthly income is more than $80,000 and annual salary is $1 million. She is a s sociated with renowned brands and designers like H&M, Tommy Hilfiger, Philipp Plein, Ralph Lauren, and many more.

Apart from this, Baldwin lives a lavish life in New York but travels often for work. She owns many luxurious properties and gadgets.