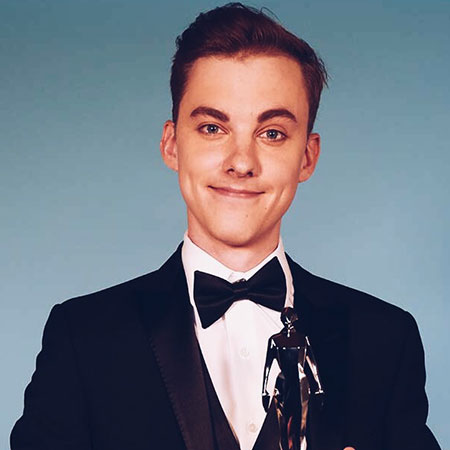 Jon Cozart is one of the most successful YouTubers who rose to fame for his YouTube channel called Paint. He ama s sed over 4.63 million subscribers on his channel, as of 2019. He has created a lot of diverse content for viewers and they have really enjoyed his videos. He is also a musician and has uploaded parody music videos to make fun of various topics like Disney princesses.

Jon Cozart was born Jonathan Charles Cozart on April 26 in 1992 under the star sign of Taurus and is 27 years of age as of 2019. He was born in the town of Little Rock, Arkansas, U.S but was raised in Houston, Texas when he turned 6 years old.

Cozart has kept the information about his family background under the radar. Ethnicity wise, he is a White and is an American as per his nationality.

He went to Cyprus Creek High School and graduated in 2011. After this, he moved to Austin Texas and studied film at the University of Texas. Jon is better known by his online alias Paint which was a name given to him by his brother.

Jon Cozart is a professional Youtuber like ClaraBabyLegs and his primary source of income is his YouTube channel. He has a channel named “Paint” which he created way back on December 27, 2005. As of 2019, he has over 4.63 million subscribers on his channel.

He started making videos as a means to avoid writing papers in middle school. On 11 July 2011, he uploaded “Harry Potter in 99 seconds” which quickly became viral. His content is somewhat similar to another YouTuber Ryan Higa who also posts parody videos, parody music videos, and comedy videos.

One of his most popular video series includes "After Ever After" where Disney princesses are put in real-life circ u mstances and the first video in the series was uploaded in 2013 and has gathered over 84 million views.

Jon Cozart’s Net Worth And Earnings

Cozart has a lot of followers on his various social media platforms. On YouTube alone, he has got more than 4.63 million viewers. According to Socialblade, he earns $961-$15.4k monthly and $11.5K - $184.5K yearly from his channel.

His videos have been viewed more than 400 million times which is astounding. His estimated net worth is $600 thousand as of 2019. Apart from this, he has kept his earnings from his live shows and other ventures a secret.

Sources also reported that the YouTuber also has a house in Los Angeles, California. Though the financial details of the mansion are not revealed, the average price of the house in LA is around  $849,500.

Cozart is not married and is single for the time being. On June 15 of 2017 Cozart came out as bisexual via a Tweet, this confirmed long-running speculations that he was not straight. In one of his videos, he stated that “…even though you think I am gay, I still love you…” but it could’ve been part of the scripted video too. However, he had a girlfriend somewhere in between 2014 and 2015.

He was in a relationship with Shannon Barry and they shared photos on their social media accounts at the time. In a blog post, Barry wrote that Jon was a very good persona and he helped her a lot with her Crohn’s disease and it was not part of what separated them. Apart from this, he has kept a very low key life with no known affairs of any sort.