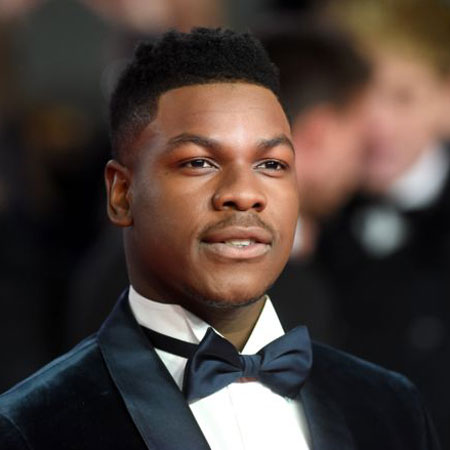 BAFTA Awards winning British actor, John Boyega is well recognized for his role Finn in the 2015 movie, Star Wars: The Force Awakens and 2017's sequel Star Wars: The Last Jedi. His performances were highly appreciated by the fans and critics.

Boyega is also popular for his roles in the movies, Detroit, Pacific Rim Upraising and the TV series, 24: Live Another Day. He made his big-screen debut in 2011 from the sci-fi comedy movie, Attack the Block.

John Boyega was born John Adedayo B. Adegboyega on 17th March 1992 in London, England under the birth sign Pisces. Boyega holds both Nigerian and British nationalities and as far as his ethnicity is concerned, he is Black.

His Nigerian British parents, Abigail (works with the disabled) and Samson Adegboyega (a Pentecostal minister) raised him with his two sisters, Grace and Blessing Boyega.

Boyega attended Oliver Goldsmith Primary School and later studied at Westminster City School. He played his first role as a leopard during primary school at the age of 5. Between the age of 9 and 14, he joined the theater after obtaining financial support from a hardship fund.

In 2012, Boyega earned National Diploma Degree in Performing Arts from South Thames College at the college's Wandsworth campus. Later, he attended the University of Greenwich to study BA Film Studies & Media Writing but dropped out to pursue a career in acting.

At the initial phase of his career, he was trained at the Identity School of Acting in Hackney. He then performed in Six Parties at the National Theater and category B at the Tricycle Theater.

His father wanted him to be a preacher like his father but he chose to be an actor.

John Boyega made his movie debut in 2011 from the science fiction horror comedy film, Attack the Block directed by Joe Cornish. He shared the screen with Jodie Whittaker, Alex Esmail, Nick Frost, and Luke Treadaway.

The same year, he worked in another movie, Junkhearts directed by Tinge Krishnan.  In the movie, he portrayed the role of a drug dealer, Jamal. In 2015, he appeared in the epic space opera film, Star Wars: The Force Awakens and two years later in the sequel of the Star Wars, Star Wars: The Last Jedi.

In 2017, he worked in the period crime drama film, Detroit with Will Poulter, Hanna Murray, John Krasinski, and Anthony Mackie. Some of his other works include Half of a Yellow Sun, Imperial Dreams and The Circle.

As of 2018, he worked in a science fiction film, Pacific Rim Uprising as Jake Pentecost.

Boyega made his TV debut in 2011 from the TV series, Da Brick. The same year, he worked in Becoming Human as Danny Curtis and Law &Order: the UK as Jamal Clarkson.

He then worked in My Murder, The Whale, Saturday Night Live, and Tinkershrimp & Dutch. Particularly, he is popular for his roles in:

As of 2018, Boyega worked in the series Star Wars Forces of Destiny and voiced Bigwig in Watership Down. Besides, Boyega also voiced Finn in video games, Disney Infinity 3.0 and Lego Star Wars: The Force Awakens.

John Boyega has been nominated for several prestigious awards and some of them are:

John with his award. SOURCE: YNaija

As of 2018, John Boyega is single. In 2017, Boyega was spotted with an unnamed Nigerian girl who was a s sumed to be his girlfriend. The two, however, have not confirmed their relationship yet.

Boyega is very close to his family. In 2017, he took his entire family at the premiere of the Star Wars: The Last Jedi at 'The Royal Albert Hall' in London. Once there was a huge rumor of him being romantically linked with co-star, Daisy Ridley but later on, he said that the rumor was false.

He was mentored by Robert Downey Jr. aka Iron Man.