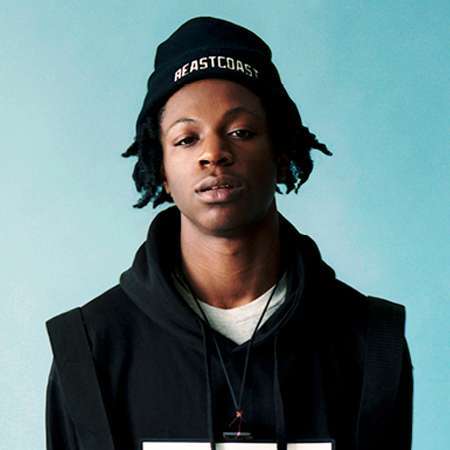 Joey Badass was born Jo-Vaughn Virginie Scott to Jamaican immigrant parents on 20th January 1995 in Brooklyn, New York. Badass was the first child of his immediate Caribbean family born in America. When he was five years old, his parents divorced and later, his mom was forced to do two jobs to support her and Badass.

His mother raised him in Bed-Stuy where he attended the Edward R. Murrow High School to study acting but transitioned towards music and later focused in rapping.

From the early age of 11, he started writing songs and poetry. During his high schooling, he along with his school friends, Capital Steez and Powers Pleasent founded a collective Progressive Era or Pro Era. Later, CJ Fly also became the founding member of the collective.

Initially, Badass started rapping under the name ‘’JayOhVee’’ but later it changed to Joey Badass. As per him, his name was changed because it sounded cool at the time.

Joey Badass uploaded a video of himself freestyling in October 2010 in YouTube. The video was again posted on World Star Hip Hop, American hip hop site which caught the attention of Jonny Shipes, the founder of Cinematic Music Group.

In 2010, Badass signed the contract with the music group. Two years later, he released a video for ‘’Survival Tactics’’ with Capital Steez via their YouTube channel, ‘’PROfckingERA.’’ In February 2012, the collective (Pro Era) released their debut mixtape named, The Secc$ Tap.e.

Even after Badass signed the contract with the music group in 2010 but started working from 2012. The year, he released his debut mixtape, 1999. Complex magazine named the mixtape as one of the 38th best album of 2012. On 6th September, he released another mixtape, Rejex.

On 21st March 2013, he along with Pro Era began the Beast concert tour. The same month, it was announced that he would be the part of XXL Magazine’s 2013 Freshman Class. On 29th October, he released his second mixtape, Summer Knights EP which hit #48 on the US Billboard Top R&B/Hip=Hop Albums Chart.

Me 4 the cover of @oystermagazine look at that melanin

In 2014, Badass made his debut in acting in a quasi-autobiographical short film, No Regrets where he portrays himself. He says,

‘’ it's been my dream to act since I was in like eighth grade. I always wanted to be an actor. And I feel like the music just made it a little bit easier for me to chase that dream.’’

Two years later, Badass made his TV debut in the second season of hit TV series, Mr. Robot where he portrayed the role of a recurring character, Leon.

His amazing songs and albums, helped him to win BMI R&B/Hip-Hop Awards. He has been also nominated for BET Awards and BET Hip Hop Awards.

Joey Badass has an estimated net worth of over $2 million, but, the amount is still under review. Badass makes a huge salary from his rapping career. He also earns from his albums which made the following sales:

Joey Badass is private when it comes to his private life. Badass prefers to keep his dating life and relationship low key. As of 2018, he is more focused on his career which might be the reasons behind him being unmarried and single.

On 18th June 2018, Badass posted a picture with a baby whom he is addressing his child. He, however, has not revealed anything regarding the baby’s mother.

Celebrating my first Father’s Day today with my beautiful daughter. Thank you guys for all the wishes. Sending love to all the dads out there enjoy!

Previously, Badass was rumored that he had an affair with Vashtie Kola, but, they have not disclosed anything regarding their dating life.

The rapper was arrested in January 2015 in an accusation of allegedly breaking a security guard’s nose before performing at the Falls Festival in Australia.

After Badass declared himself the ‘’#1 independent hip/hop artist in the world’’ in 2015, the tension between him and Troy Ave arose. They had the feud between one another, however, Badass refused the report of a feud.

In an interview with Ebro Darden in 2015 Badass stated,

‘’ At some point, you gotta have some level of respect for Troy because, at the end of the day, we're both independent artists who are standing on major platforms next to a whole bunch of major artists and they know who we are.’’

He, however, reignited the feud in his single, Ready. In the response of the single, Ave also released a diss track, Badass where he not only insults Badass but also targeted Capital Steez and his suicide. Ave was highly criticized for his words.

Later, Badass responded to ‘’Badass’’ and stated that it never referred to him directly.