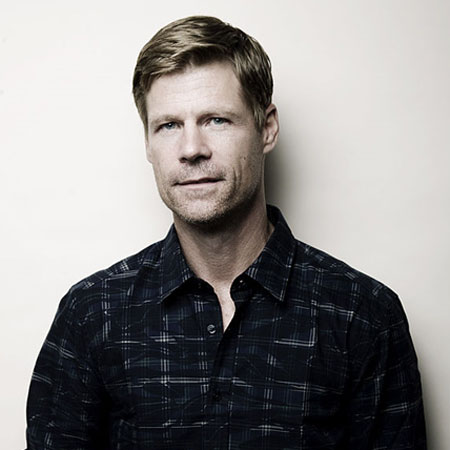 Joel Gretsch is a reputed actor and director, widely known for his remarkable roles in various movies and series. His major roles include Push, The 4400 and Minority report. He appeared as a guest star in a Showtime Comedy Drama which earned him a nomination for the Emmy Award. He appeared in The Vampire Dairies from 2016-2017.

Joel was born on December 20, 1963, in St. Cloud, Minnesota, USA. He is an American by nationality and belongs to the white ethnicity. He is the son of Russ Gretsch and Barb Gretsch. He has a sister named Jane Gretsch and a brother named Steve Gretsch.

Born in St. Cloud, Minnesota, Gretsch grew up in Albany, Minnesota. He attended the Guthrie Theater in Minneapolis, where he studied acting. He moved to Los Angeles in 1989, where he currently resides with his family.

Joel Gretsch began his career working in theaters in the early 1990s. He made his stage performances in Moliere's Tartuffe and John Patrick Shanley's Danny and the Deep Blue Sea.

He has made his appearance in episodes of Married... with Children, Melrose Place, Friends and Saved by the Bell: The New Cla s s. He has also appeared in episodes of JAG, Silk Stalkings, CSI: Miami, Burn Notice, and NCIS.

Gretsch played the role of wealthy advertising executive and husband of a supermodel on an episode of Law & Order: Criminal Intent. He also had two guest appearances on NBC's Journeyman, where he played the role of the father of protagonist Dan Va s ser.

Gretsch has also played supporting roles in numerous movies including Bobby Jones in The Legend of Bagger Vance, Minority Report, The Emperor's Club and National Treasure: Book of Secrets.

He has recently appeared as guest star in the Showtime Comedy-Drama, The United States of Tara in the 1st season's last two episodes, which was created by Diablo Cody. It was later nominated for the Emmy Award.

He appeared in The Vampire Dairies from 2016-2017. The series featured Paul Wesley, Kat Graham, Nina Dobrev, Ian Somerhalder, and other stars.

Joel Gretsch's Net Worth And Salary

Joel Gretsch has earned a decent amount of sum from his work and has a well net worth over $3 million as per celebrity net worth, in 2019.

The actor has landed a number of major roles in movies and TV series. In 2011, Gretsch was a cast in the movie National Treasure: Book of Secrets which grossed a whopping amount of box office collection making over $257 million.

Gretsch, age 53, is married and has two children. He married his girlfriend, Melanie Shatner on September 5, 1999. Melanie is a well-known actor, born on August 1, 1964. She is known for her major role as Becky Morgan in the film series named Subspecies. She is the daughter of famous actor and director, William Shatner.

The couple met a few years ago, during their film career. They got married after having an affair for several years. The couple is blessed with two daughters, Kaya Gretsch, and Willow Gretsch.

They welcomed their first child, Kaya in the year 2002 and second child, Willow in 2005. Gretsch currently resides in Los Angeles with his beautiful wife and children.

Joel Gretsch stands at an amazing height of 1.5 meters (5 feet 11 inches) and has a great physique.