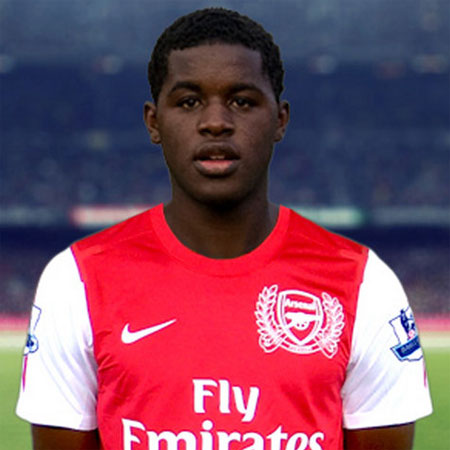 Joel Nathaniel Campbell Samuels better known as Joel Campbell is a footballer from Costa Rica who is currently playing for the Greek club Olympiacs on loan from English club Arsenal.  Campbell also plays for his nation Costa Rica as a forward in the Costa Rican national team. He plays forward most of the times but is deployed on the wings sometimes. His father Humberto Campbell  among his parents supports him well.

Campbell started his professional football club career in 2009 with Deportivo Saprissa S.A.D. However, he was sent to Puntarenas on loan in January 2011. Speculation of Campbell being approached by Arsenal started from July 0f 2011. Costa Rican media even said that Campbell has agreed to sign 5 year contract with Arsenal choosing them over Sevilla nd Florentina. It was officially announced by Arsenal on 19 August 2011 that they had signed Campbell. But it was known on 27 August 2011 that he could not get a work permit to play in England. So, he moved to FC Lorient on loan. He scored his first goal for the club on 1st October 2011 against Valenciennes which was a 2-0 win for FC Lorient. He was again sent on a season long loan to Real Betis in La Liga on 6th July 2012. Campbell scored his first goal for the club in a 302 win against Deportivo La Coruna. Campbell got a work perit in England in Summer of 2013, however he joined Olympiacos on a year loan. Campbell came as a great assist in the clubÆs 5-1 win over rivals OFI Crete. He scored against 4-0 win against PAOK Thessaloniki. In a 2-0 win over Manchester United in the first leg of æRound for 16Æ clash, Campbell scored the second goal. The game was held on 25 February 2014. Besides, his club career Campbell is also a forward in the Costa Rican national team.  Campbell got selected for 2009 CONCACAF U-17 as a part of Costa RicaÆs squad. He finished as the teamÆs highest scorer though only with two goals and in the 2011 CONCACAF U-20 championship, he finished as a joint top scorer with six goals.

His romantic life is kept out of media, so we practically donÆt know who he is dating but there are zero to none chances of this 21 year old lad being married. He is a fine built black race footballer with a height of 1.78m and an accompanying proper weight. Campbell got into a serious controversy, serious enough to get rebuked by FIFA for unsporting behavior. When a video of CampbellÆs shocking off-the-ball dive against USAÆS Matt Beslerin in a World Cup qualifying match came out in September 2013, he faced universal condemnation. the dive was called ōPatheticö, ōCynicalö, and ōdisgracefulö too. FIFA officially rebuked him on 4th October for unsporting behavior.

With his Current Team Olympiacos, Campbell won Superleague Greece 2013-14 season. His salary is worth 9,000,000 Euros and his market value is worth 5,000,000 Euros. He wears a No.26 shirt and plays as a forward in the club Olympiacos