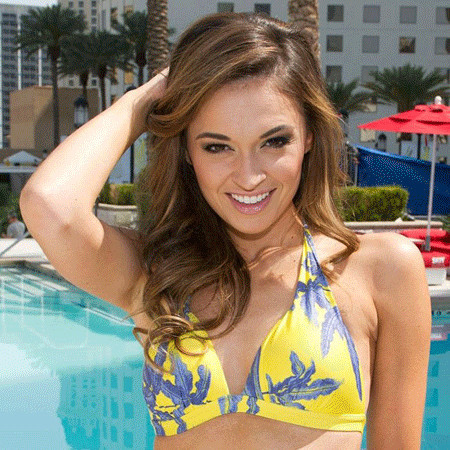 Joanne Nosuchinsky, an American TV personality, is known for appearing on various shows on Fox News Channels. She is also the beauty pageant titleholder who won Miss New York USA 2013. She appeared as a permanent panelist on the Fox News Channel's late-night show Red Eye w/ Tom Shillue, along with other Fox News programming.

She performed in The Awesome 80s Prom at the time of the pageants and continued to do so until the show closed. She made her debut appearance as a guest panelist on Red Eye w/ Greg Gutfeld on the Fox News Channel on September 18, 2013. She announced on the  August 6, 2016 broadcast of Red Eye that she is leaving Fox News to pursue an acting career.

Joanne Nosuchinsky was born on September 26, 1988, in Freehold Township, New Jersey, where she spent most of her childhood days with her loving family. Her birth sign is Libra. She was born to  Marianne (Yavarone) and James “Jim” Nosuchinsky.

As a child, Joanne suffered from severe scoliosis which is an abnormal lateral curvature of the spine. She had to suffer a lot due to it. She is a Roman Catholic and holds an American Nationality. She is very close to her sister Mary, who is a top dancer/choreographer.

Joanne attended the Performing Arts Center at the Howell High School. After graduation, she went on to receive her BA degree in Fine Arts/Theatre from Rider University focusing on theatre. Joanne was always interested in taking up an acting career and entering Hollywood.

Joanne Nosuchinsky moved to NYC after graduating in order to pursue an acting career. She then decided to take part in Miss New York USA. She represented Hell’s Kitchen in the 2013 Miss New York competition. Then, as the winner of Miss New York, Joanne went to compete in 2013 Miss USA 2013. However, she failed to reach the Top 15.

Nosuchinsky went on to make her debut on Fox News Channel’s Red Eye w/ Greg Gutfeld on September 18, 2013, as a guest panelist. She was seen in its February 4, 2014, episode. Her audience loved seeing her in the Greg Gutfeld Show, hence she started as a contributor on late Sunday evenings on 31st May 2015.

The following year, she announced that she would be leaving Fox after working for over two and a half years. On 6th August 2016, she revealed that she is leaving Fox in order to pursue her career in acting.

Good luck to all the women competing for #MissNYUSA this weekend! Excited to see who will be next to join the sisterhood!

Nosuchinsky is, to date, noted for being the 2013 Miss New York and is adored by her audience on the Fox News Channel. Her a s sociation with Fox News Channel and her phenomenal performance will surely lead to a significant role in a movie in the future.

Joanne Nosuchinsky's current net worth is around to be $1 million. Nosuchinsky earns an impressive amount from her career. As per some sources, a Fox employee earns an annual salary of about $250k. With such earning, she is maintaining her lavish lifestyle.

In addition, As a winner of the Miss New York competition, she won over $150 thousand. Moreover, she also got expensive cars and got a chance to many modeling ramps as well as participated in some advertisements and world tours as well.

Joanne Nosuchinsky has received a lot of positive reviews for her performance in The Greg Gutfeld Show. She is doing great in this area and will soon be seen in many Hollywood movies. More about the life of the lovely and talented Joanne Nosuchinsky can be found active on various social media sites.

Regarding the personal life of Nosuchinsky, she is having an affair with her longtime boyfriend who is better known by his Instagram name, Goodhart. They started dating in 2015 and are sharing a great bonding together.

They post several cozy pictures together on their social media. On 10th May 2018, her boyfriend posts a picture where he mentioned their three years of a long relationship.

Regarding their marriage, it seems like they are not yet ready to start their life as husband and wife. She currently resides in Hell’s Kitchen, Manhattan, New York with her partner.

Previously, she was in a relationship with a mystery man which she revealed via Twitter:

Had dinner with an ex-boyfriend tonight. (since he doesn't have twitter, I can say this) Nice to reconnect with someone who knew you when.

She, however, has not disclosed the name of her past boyfriend. Besides, her favorite color is green and her favorite movie is Waiting for Guffman. When Things Fall Apart; Heart Advice for Difficult Times by Pema Chodron is her favorite book.

Check out the video where she says Goodbye to Fox: