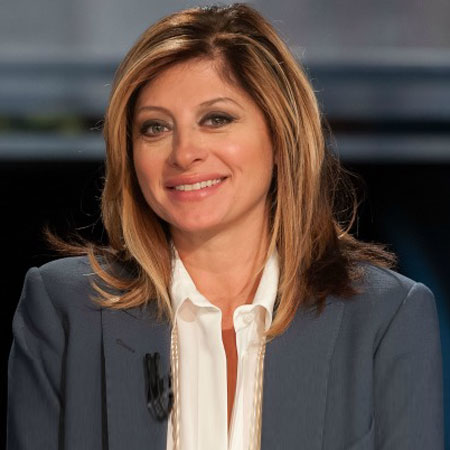 The recipient of various journalism awards, Maria Sara Bartiromo is a talented and famous journalist. Bartiromo was born in New York to Italian-American parents ethnicity on September 11, 1967. She is a television journalist but also is the managing editor and host of The Wall Street Journal.

Maria Bartiromo was born Maria Sara Bartiromo on September 11, 1967, in Brooklyn, New York City, New York, U.S. She was born to Italian-American parents. She is the daughter of Vincent Bartiromo and Josephine Bartiromo.

Maria grew up in the Dyker Heights, part of Brooklyn in New York City. She attended Fontbonne Hall Academy in Bay Ridge. She graduated from New York University with a Bachelor of Arts degree with majors in journalism and economics.

Bartiromo currently works for CNBC and has an annual income of between USD 2 million and USD 3 million. She joined CNBC in 1993, before which she worked for CNN as a producer and a s signment editor for five years. She is the host of the TV show ‘The Business of Innovation’. She has hosted many TV shows and has appeared in other TV shows as a guest.

Bartiromo is the first woman to have ever reported live from the floor of the New York Stock Exchange.  She has been hosting the show ‘Closing Bell’ since 2002, she hosted ‘Business Center from 1997-1999 and ‘Market Wrap’ from 1998-2000.

Other than these shows, she has been spotted on famous shows such as McEnroe, The Colbert Report, The Oprah Winfrey Show, Late Night with Conan O’Brien, and NBC Universal’s The Tonight Show with Jay Leno.  She has also appeared in films and doc u mentaries Risk/Reward and The Taking of Pelham 123 respectively.

Maria Bartiromo is the author of three books: Use the News: How to Separate the Noise from the Investment Nuggets and Make Money in the Economy, The 10 Laws of Enduring Success, and The Weekend That Changed Wall Street.

Maria Bartiromo's net worth is around $22 million at present. She is an author, magazine columnist, as well as a TV journalist. She has earned a decent amount of money from her career.

Bartiromo has been presented with awards like Lincoln Statue Award, Excellence in Broadcast Journalism Award, Emmy Award in 2008 and 2009 for Outstanding Coverage of A Breaking News Story and for Outstanding Business and Economics Reporting respectively, the first journalist to be inducted, 50 People Who Shaped the Decade in 2009 and Cable Hall of Fame.

Maria was also famous for her striking looks in the late 1990s and was nicknamed ‘Money Honey’. One of her fans included Joey Ramone of the famous band ‘The Ramones’ who had a crush on her.  Joey wrote a song for Maria titled ‘Maria Bartiromo’ in the album ‘Don’t Worry About Me’ in the year 2002.

Maria married Jonathan Steinberg in 1999, who is the chief executive officer of WisdomTree Investments and son of financier Saul Steinberg. The pair are living happily and there is no sign of divorce. They don't have any children yet.