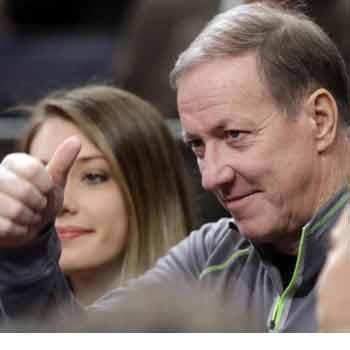 To date, the one and only quarterback in NFL history to lead his team to the Super Bowl in four Straight seasons, Jim Edward Kelly is an eminent name in the sports field. Jim Kelly played for the Buffalo Bills in the NFL and for Houston Gamblers in the United States Football League. Jim is a retired American football quarterback. Although the Super Bowl losses, Jim has had a tremendous career in the past. He has even been introduced into the Pro Football Hall of Fame in 2002.Kelly’s jersey no. 12 is the only number in the history of Buffalo Bills’ to ever be retired. Jim is currently suffering from sinus cancer and is in bad health but he is under the shelter of boundless love and prayers of his fans and relatives.

Born on February 14, 1960, in the small town of East Brady, Pennsylvania, Jim Kelly was good at sports. Jim attended the East Brady High School where he won all-state honors after passing for 3915 yards and 44 touchdowns. Later Jim played in the Big 33 Football Classic.

Jim scored 1000 points and had 30 plus point games while playing basketball in high school. Jim also led East Brady to the basketball state semifinals. Jim later attended the University of Miami where he went for 406 completions in 646 attempts for 5233 yards and 32 TDs.

His performance in Miami earned him a place in the University of Miami Hall of Fame in 1992. Jim was later chosen in the 1983 NFL Draft in the first round but he was the 14th pick. Kelly was later resigned to play for the Buffalo Bills. Jim was signed to the Houston Gamblers in 1984 and he played till 1985. After the Houston Gamblers was shut, Jim signed to the New Jersey Generals and was scheduled as their starting quarterback, but unfortunately, the league collapsed.

Jim ultimately joined the Buffalo Bills in 1986 after the USFL ceased. Jim played fantastically and thus led his team to four consecutive Super Bowl appearances and six division championships from 1988 to 1995. Jim’s four Super Bowl appearances shoe that he completed 81 of 145 passes for 829 yards and two touchdowns.

The second most in Super Bowl history is Jim’s 81 completions and 145 attempts. In the Super Bowl XXVI Jim set a record with 58 pass attempts and again in Super Bowl XXVII, Jim set a record with 31 completions. Jim has ended his 11 NFL seasons with a total of 2874 completions in 4779 attempts for 35467 yards and 237 touchdowns with 175 interceptions all while he was in contract with Buffalo Bills. Jim holds the all-time NFL record for most yards obtained per completion in a single game (44) which was formed on September 10, 1995.

Jim Kelly is highly spoken about because he has recorded an NFL best 101.2 passer rating in 1990 as well. In 1996 his contract with Buffalo Bills ended and along with it Kelly’s jersey number 12 also retired. In 1997 Jim Kelly retired from the NFL. Later on August 3, 2002, Jim Kelly was introduced into the Pro Football Hall of Fame.

Jim Kelly was dating American wrestler, Missy Hyatt. Then in 1991, Jim had an affair with model and actress, Sandra Taylor but later the couple separated. And in 1995, Jim started dating motivational speaker and activist, Jill Marie. The couple got married on 18th May 1996.

The couple had 3 children named Hunter, Erin and Camryn. Son, Hunter James Kelly was diagnosed with globoid-cell leukodystrophy and died at the age of 8 on August 5, 2005. Thus to honor his son, Jim and his wife opened a non-profit organization in 1997 called Hunter’s Hope which spreads national awareness of the disease. Jim and wife Jill founded the Hunter’s Day of Hope held on February 14 every year which falls in the birthdays of both Jim and Hunter. In 2004, the Hunter James Kelly Research Institute was founded at the University of Buffalo where neurologists and clinicians are currently studying myelin and its disease.

On June 3, 2013, Jim Kelly was diagnosed with squamous cell carcinoma, cancer found in the upper jaw for which the doctors removed a part of his jaw, made prosthesis of six fake teeth and bone and fastened it into the hole left by the surgery. The doctors also grafted a rectangle of skin from his upper left led to replacing it in the roof of his mouth. And Jill Kelly announced on Jan 18, 2019, via her Instagram that her husband became the cancer-free. The couple has been together for a long time and is sharing the strong bond love.

Later on March 14, 2014, a follow-up test at the Erie County Medical Center showed that Jim’s cancer had recurred. Regular radiation on Wednesday, Thursday and Friday and chemotherapy on Mondays and Tuesdays for sinus cancer, designed to stop cancer going to the carotid artery in his head, has taken away Jim’s hair and Jim has also lost 51 pounds.

On August, Jim is scheduled to have an MRI to check whether the treatments are working or not. Jim is currently safe and happy under the love and prayer of his well-wishers and when asked if he is afraid to die of cancer, Jim smiles and says no.