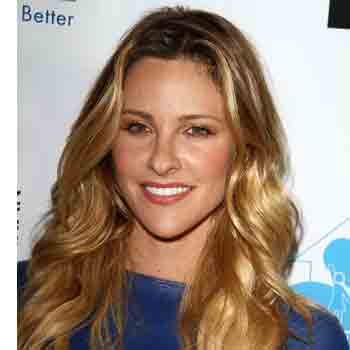 Jill Wagner is a co-host for the ABC summer reality show called Wipeout since 2008. She currently hosts Handcrafted America on INSP. Jill will feature in the upcoming Canadian movie Braven alongside Jason Momoa, Garret Dillahunt, Stephen Lang, and Brendan Fletcher.

She has married her boyfriend former pro hockey player David Lemanowicz since April 2017. They became engaged in 2016 The couple resides in Los Angeles.

Jill Wagner was born in the year 1979 on January 13 at Winston-Salem, North Carolina, United States. Jill grew up without knowing her mother’s love. Her mother died when she was very small.

She was raised by her father David Wagner, who is a U.S Marine, and by her grandmother.

She attended the Ledford High School located in Wallburg, North Carolina. She holds a bachelor’s degree in business management from North Carolina State University in the year 2001.

Being fascinated by business, Jill completed her graduation in business management. However, with the flow of time, her interest got diverted to modeling.

After completing college, she moved to California. In 2003, she was selected as the cast member on the MTV series Punk’d. She has appeared in Stuff magazine following her appearances in the series. She was ranked #90 on Maxim's Hot 100 women in 2004.

She is widely known for her phenomenal performance in the Wipeout, Wolf Watch, and Splinter. Jill is a famous name in the entertainment arena in the United States and is trying to set the image worldwide as well. She has been active in this field since 2003. She is in the rank 74 in Maxim magazine's Hot 100 women list in 2014.

She had posed for the 2006 July issue of FHM magazine as well. From 2005 till 2011, she was featured as the Ford Motor Company’s Mercury brand spokesmodel in television ads making her popular with the nickname of “The Mercury Girl”.

Besides modeling, she is also a very talented actor. She has appeared in several of filmology. She has brief as well as major roles in the plays she appeared in. Until 2005, she had appeared in short stints of the series like in an episode of Monk as Crystal Smith, two episodes of Dr. Vegas, Quintuplets as Cammie in the year 2004, followed by Junebug as Millicent in 2005.

In 2006, she got her first major role as Krista Starr in the Spike TV series called Blade: The Series. She has been acted in several other plays like Turning Blade, Stargate Atlantis, Bones, Splinter, Wipeout, Attack of the show, Jimmy Kimmel Live, Dancing with the Stars, Entertainment Tonight. She has worked with several Hollywood artists like Jimmy Kimmel, Tayler Posey, Dylan O'Brien, and so on.

Wagner was tapped to host an original series, Handicraft America on INSP, the series that started its third season in August 2017. She was cast in the Canadian film Braven in late 2015. The film was released on February 2, 2018. She has been seen in various Hallmark Channel original TV films since 2015.

Jill enjoys a net worth of $ 4 million and has a high salary pay to live her life comfortably. She is still struggling to make her into more fame.

Jill is a very beautiful person having a height of five feet and eight inches. She has a body weight of 52.2 kg. She has been able to maintain her weight and looks and she is considerate on her diet intake, takes exercises daily, and performs yoga to look fresh and healthy.

She has a very nice skin tone and complexion accompanied by lusciously silky brown hair. She has sexy body measurements measuring the size of 34-23-34 inches. She looks incredibly hot in the bikini as she has a long pair of legs with a fluffy bosom. She looks ravishing in any of the outfits she appears in. She is a total diva.

Jill Wagner is currently unmarried. According to a reliable source, she is engaged to her longtime boyfriend David Lemanowicz. However, the couple has not announced their wedding plan yet. The duo also shares a daughter Lija.

There have not been any hoaxes concerning her love affairs or boyfriends. According to her, she is still single and ready to mingle. She has not been married to anyone.

However, it is really difficult to believe that she is not engaged in love and does not have a boyfriend. It is suspicious though. This is really an amazing thing that, for such a stunning and beautiful person not to come into the rumors and maintaining her clean image.

However, some sites state that she was engaged and planned to get married in Spring 2013. But the news is not a confirmed one.

As for her fan following, she has a long list of fans. She can be followed by her social accounts on Facebook, Twitter, and Instagram. Her biography can be found on different internet websites including Wikipedia along with her gorgeous pictures, videos, and articles on her.