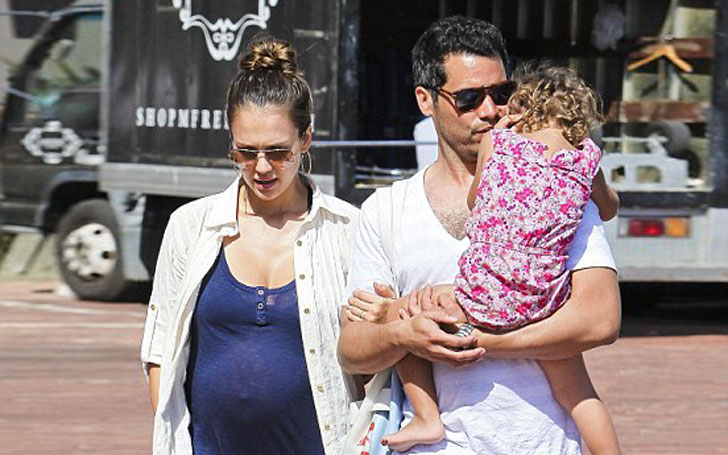 Jessica Alba is all set to expand her family. Yes, you got it right. Alba is pregnant with baby no. 3.

Jessica Alba and her husband, Cash Warren are married since 2008 and they are proud parents of two daughters: Honor Marie Warren and Haven Garner Warren. And now, the family of four is turning into a family of five soon!

Mother of two, Jessica Alba, is all excited to welcome her third child. The 36 years old actress took to Instagram to share her happiness with her fans. She shared a cute video with her two daughters on her Instagram on 17 July and captioned it:

In the shared video, she appeared with her two daughters where Honor holds balloon 1, Haven holds balloon 2, and Jessica held a balloon 3. Well, looks like not only the to be a mother but the siblings are excited to welcome the new member as well.

In an interview with PEOPLE, the Honey actress shared her experience of being a mom saying:

“When I became a mom, I just kind of opened up and got a new perspective. I have a fearlessness and a confidence that I think you can only get with experience and age. Some people get it earlier, but it took me a while.”

Alba was spotted spending a vacation in Oahu, Hawaii with her family on July 15. She appeared in a pink bikini and looked happy with her daughters.

Also read: Jessica Alba bought a House in Beverly Hills. Know about her growing Net Worth in 2017

Happily married couple, Jess, and Warren first met on the sets of Fantastic Four in 2004. Warren was a director’s assistant at that time. After dating for about three years the couple announced they're engaged in December 2007.

Jessica Alba with her daughter

In an interview with Cosmopolitan in 2010 the actress shared she had a love at first sight with her film producer husband:

"Right after I met [Cash], I called my best friend and was like, 'I met this guy and I feel like I've known him forever and I'm gonna know him for the rest of my life,"

They got married on May 2008 in the Beverly Hills courthouse where Alba was dressed in a long blue dress. The source said at the time said: “She looked happy but nervous,”

The couple welcomed their first daughter, Honor Marie Warren in 2008 and second daughter, Haven Garner Warren in 2011. Jessica  Alba and Cash Warren are now married for over nine years and as far as their Instagram tells us, this couple is happy and having fun.

Cash Warren shared a picture of them on the occasion of his beloved wife Jessica Alba's Birthday on 28th April on his Instagram. He mentioned how his love for the actress can't be explained in words.

Alba was previously engaged to actor Michael Weatherly. They broke up in 2003 after dating for three years.