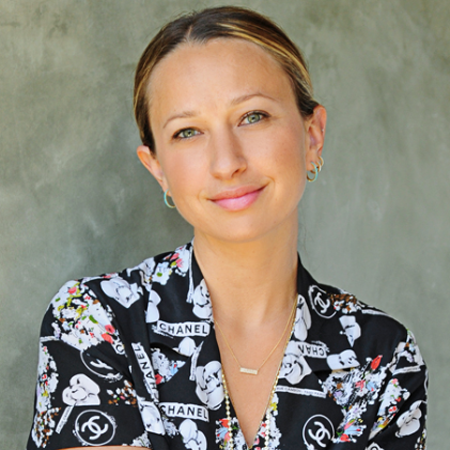 Jennifer Meyer is an American jewelry designer. She is the daughter of Ronald Meyer, vice chairman of NBC Universal and former president and CEO of Universal Studios. She was titled 2007 Jeweler of the Year in the Us Magazine "Hot Hollywood Style" issue.

Meyer has a stepfather named Rabbi David Baron from her mother's second marriage. Her stepmother from her father another marriage is Kelly Chapman.

After completing her studies, Jennifer Meyer returned to her family business in jewelry making roots in the year 2004. She was frustrated searching for a leaf charm for a necklace and decided to make her own.

After attending various jewelry classes and taking advice from other jewelry, Meyer designed her trademark leaf-shaped 18-karat gold charm. She was titled 2007 Jeweler of the Year in the Us Magazine "Hot Hollywood Style" issue.

Meyer has got a huge Hollywood connections. Meyer's father is the President of Universal Studios, and her ex-husband, Tobey Maguire is a renowned actor.

Meyer made her jewelry national debut when a designer took one of Meyer's leaf pendants for Jennifer Aniston to wear in the romantic-comedy film, The Break-Up.

In 2012, Meyer Jewelry received an award from the CDFA/Vogue Fashion Fund, and the following year in 2013 Jennifer Meyer got nominated for the CDFA Swarovski Award for Accessories Design.

Meyer, 40, was married and had two children. She was married to Spider-Man's star, Toby Maguire. She met Tobey during the shoot of the movie Seabiscuit at Universal Studios. The duo was engaged in April 2006. She gave birth to their daughter named Ruby Sweetheart Maguire on November 10, 2006.

The couple tied their knot on September 3, 2007, in Kona, Hawaii. They welcomed their second child, a son named Otis Tobias Maguire on May 8, 2009. They stayed in a relationship for nine years.

The duo made an announcement of their separation in October 2016. She is still good friend with her ex-husband even after the divorce. She currently resides in her new home at Los Angeles. Her new home is luxurious, as she has shared each and every detail about her home to the famous website, people.com.

Jennifer Meyer earns a decent amount of money from her jewelry business, as she made very attractive and exotic jewelry to many popular celebrities. Her jewelry designs range from $350 to $8,500, which is available on her official website.

As per the sources shared in people.com, she is living a luxurious lifestyle in her new home at Los Angeles. Looking at her lifestyle and earning, her net worth can be more than millions.