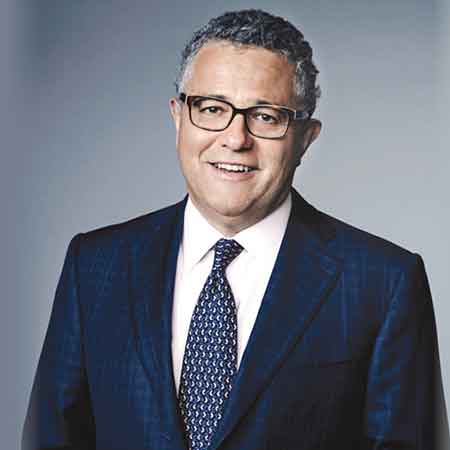 American lawyer, blogger, author and pundit, Jeffrey Toobin who has won numerous Emmy awards for his contribution to journalism is best known as the legal analyst for CNN and The New Yorker. He also served as an a s sociate counsel in the Department of Justice during the Iran–Contra affair. Toobin started writing during the 1990s and among his books, his most famous is the one based on the O.J. Simpson murder case. The book was adapted as a series The People v. O. J. Simpson: American Crime Story which aired in 2016.

Jeffrey Toobin was born on May 21, 1960, in New York, US to a Jewish family. He is the son of Marlene Sanders, former ABC and CBS News correspondent, and Jerome Toobin, a news broadcasting producer.

Jeffrey Toobin attended Columbia Grammar and Preparatory School, a private preparatory school in New York City. Then he joined  Harvard College for undergraduate studies where he covered sports for The Harvard Crimson.

Jeffrey Toobin started freelancing for The New Republic while he was a law student. Soon after graduation, he served as a law clerk to a federal judge and then as an a s sociate counsel to Independent Counsel Lawrence Edward Walsh. Then he served as an Assistant U.S. Attorney in Brooklyn but resigned after three years.

Later, Toobin wrote a book about his work in the Office of Independent Counsel but due to the objection of Walsh he went to court to affirm his right to publish and he won the case. In 1993, he joined The New Yorker and became a television legal analyst for ABC in 1996. He has provided broadcast legal analysis on many high-profile cases.

In 1994, Toobin broke out the story about O. J. Simpson legal team planned to play "the race card" by accusing Mark Fuhrman of planting evidence in his criminal trial in The New Yorker. He also provided analysis on Michael Jackson's 2005 child molestation trial, the O.J. Simpson civil case. In 2000, he received prestigious Emmy Awards for his coverage of the Elián González custody saga.

Before joining CNN in 2002, Jeffery Toobin was a staff writer at The New Yorker. In 2003, he interviewed Martha Stewart about the insider trading charges against her. He was a member of the private discussion group, JournoList.

Jeffrey Toobin is one of the reputed media personalities, he has an estimated net worth of $10 million. As of 2018, he served as legal analyst for CNN and his salary is more than $85k. Previously, he worked as an Assistant U.S. Attorney where he earned between $49,000-$142,000.

2. The Oath: The Obama White House and the Supreme Court

3. American Heiress: The Kidnapping, Crimes, and Trial of Patty Hearst

Jeffrey Toobin is happily married to his longtime girlfriend, Amy Bennett McIntosh. The couple tied the knot on May 31, 1986.  Amy is a 1980 Harvard graduate who holds an MBA from Harvard Business School and worked at Verizon and Zagat Survey. The duo first met at the Harvard Crimson while working in college.

In 2011, Toobin presented his views on US constitution in the discussion with journalist Fareed Zakaria. He stated that he believes the US Constitution should be amended to eliminate the inequities of the Electoral College and the US Senate.

Below we present the video of Jeffrey Toobin,