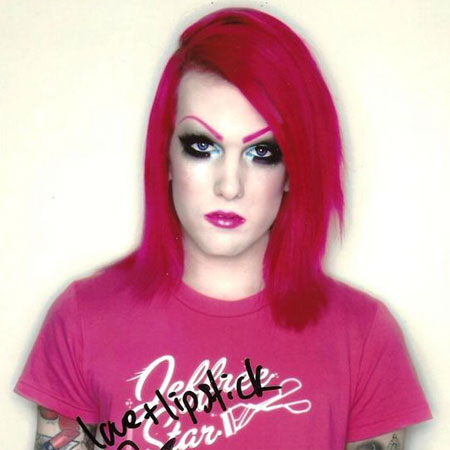 Jeffree Star is an American singer-songwriter, makeup artist, fashion designer as well as a model from Orange County, California. He is also a founder and owner of the well-known cosmetic company Jeffre Star Cosmetics. He promotes his company on his YouTube Channel jeffreestar where he has more than 16.7 million subscribers as of 2019. According to Forbes, Star made a staggering $18 million from his channel in the last year.

Who is Jeffree Star?

Jeffree Star was born as Jeffrey Lynn Steininger on November 15, 1985, in Orange County, California, U.S. He belongs to white ethnicity and holds an American nationality.

Star is a son of Laurie Steininger (mother) and Glen Steininger. (father). He lost his father at a very early age of just 6. Following the untimely demise of his father, Jeffre was raised by his single mother.

Star was into make-ups from a very early age and used to suggest his mother to wear the makeup of his choice and convinced her to let him wear it to school when he was in junior high.

Jeffree Star is a champion at using social networking sites, and he used MySpace site to build his fashion career. He started writing blogs on this site too.

Star covered the genre like fame, beauty, and life while doing his blogging work. His music career has been an amazing one too.

In the year 2007, Star released an EP, Plastic Surgery Slumber Party and it managed to do amazingly well in the market. Other albums and EPs to his name include the likes of Blush, Mr. Diva, and Love to My Cobain.

Star has also been part of TV shows, movies, and commercials. Some of them are Hella Crazy, What Now, LA Ink and Video on Trial.

Star released his first and only studio album Beauty Killer in 2009 and appeared in the second version of Kesha's music video "Take It Off" in 2010.

Star has worked with several other musical performers, such as  Blood on the Dance Floor, Deuce,  Millionaires, and Larry Tee.

He is the owner and founder of Jeffree Star Cosmetics. The cosmetic company was founded in November 2014. The artist promotes his company through his YouTube Channel called jeffreestar. As of 2019, he has over 16.7 million subscribers on his channel.

His company makes roughly $100 million a year from its selling.

As of 2019, Jeffree Star has an estimated net worth of $200 million, according to celebrity net worth. He has been running his own YouTube channel under the title jeffreestar and has over 16.7 million subscribers as of 2019. It is a major source of income. He made $18 million from his YouTube endeavours alone in 2018.

Star owns several luxurious cars and a mansion. He has a house in Calabasas, CA.some of the best cars in his collection are BMW i8, BMW z4, Rolls-Royce etc.

Jeffree Star is openly gay and dated popular Instagrammer Nathan Schwandt since March 2015 until their break up on Jan 12 2020.

Star previously was in a relationship with Chris Croker for 4 years from May 2005 to July 2009. He was even rumoured to have hooked up with Tyler Carter.

Star resides in Los Angeles with his boyfriend, Nathan.