Jay Z and Beyonce are Officially a Billion-Dollar Couple,How much is Their Net worth? 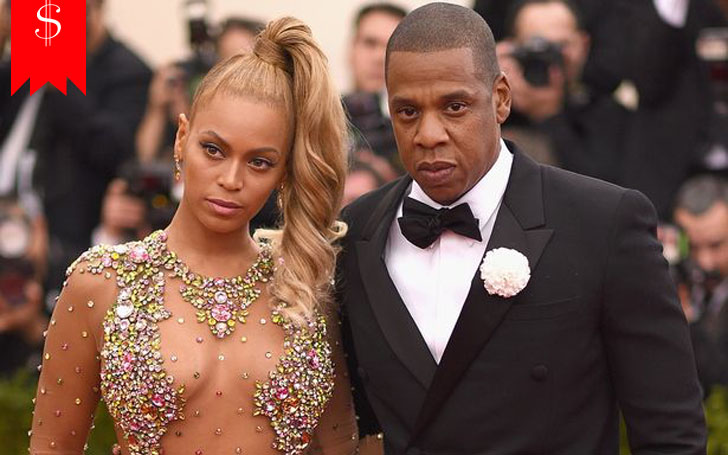 Jay Z Carter and Beyoncé Knowles were already a Billion dollar couple of their fans. Now, the Forbes magazine has revealed that they are literally worth more than a billion-dollar. The news came out on 17 May 2017. They were also the highest paid celebrity couple of 2016.

Beyoncé and Jay Z, the couple who is waiting to welcome their twins this summer is trending in the media in these days. And with the news that they are worth more than a billion dollar together, everyone is talking about them. We have some specific details about Beyonce and Jay-Z's assets.

Lemonade star Beyonce once told that her key to success is that she’s ‘never satisfied’ and that’s why they are always on their grind. That must be how Beyonce and Jay Z now have a combined fortune of over $1 billion.

Forbes Magazine announced that they are now officially a billion-dollar couple, by releasing the statement on May 17. Beyonce is listed at the 46th position of the America’s 60 Wealthiest Self –made woman by Forbes.

On the same list, Forbes also included other richest women celebrities like Meg Whitman, Talyor Swift, and Celine Dion and so on.

According to Forbes, Beyonce, 35, has acquired a personal net worth of $350 million. Her husband Jay Z, 47, has a net worth of over $810 million, as per last week’s ranking of hip-hop’s richest acts. She is the highest paid woman in the music of 2017.

Jay Z is only second to P Diddy who tops the list with $10 million more net worth than him. That brings the couple to a combined net worth of $1.6 billion.

What made Beyonce and Jay Z a Billion-Dollar Couple?

So how exactly, did this couple build an empire of nearly two-billion-dollar? Once Forbes asked Knowles, and the answer was straight ‘I have never met anyone that works harder than me in the industry.” That is at the same time inspiring and some class Hollywood attitude.

However, Mr. Carter has not been hitting the road as hard as his wife of late. That's going to change this year slate of many festivals dates in the wake of a new ten –year, Jay Z has signed a $200 million contract with Live Nation in the second week of May.

The couple has plenty of money separately as well, obviously. However, their joint money they spend on Roc Nation, Armand de Brignac and others.

The Carters and Knowles both hold significant equity in tidal, the streaming service Jay Z purchase for $56 million two years ago. In 2016, Beyonce released Lemonade which was debuted at no. 1 on the US Billboard 200.

The Lemonade led with nine nominations, including album of the year, the song of the year, and record of the year at 2017 Grammy Award. This album became one of the best-selling albums of 2016; it amassed more than 2.5 million copies in global sales.

Lemonade tops the list of #1 position which is above than the #2 position of Adele’s 2.4 million copies sold album 25.

Beyonce and Jay Z, the billion dollar couple obviously have an envy-worthy lifestyle. Apart from owning multiple houses and vehicles, the couple likes to go on vacation often, you know in their private jet ( No passengers on their plane)

Image: Beyonce and her husband Jay Z in helitour during 2016 Anniversary vacation

Last year, they celebrated their wedding anniversary in 2016 Grand Canyon, Arizona, and took a helicopter ride.

Knowles is not only a popular musician but also someone who cares deeply about people. She supports several charitable organizations. Perhaps greatest contribution she has made is to the Survivor Foundation.

Beyonce is one of the most followed celebrities on Instagram. You may be interested to know about other celebrities on the same list, watch the below video.

Beyonce is all-time most followed celebrities on Instagram. She has been in the top 10 since Instagram became popular.