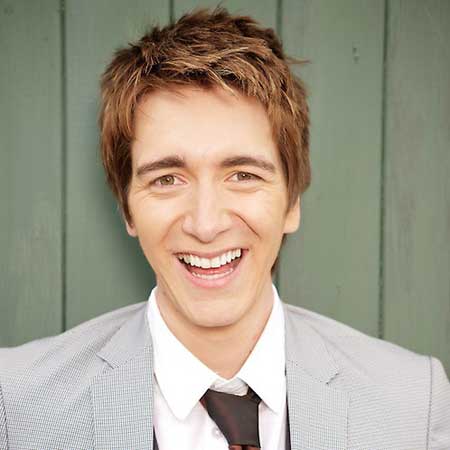 James Phelps is a British actor and a well-known personality who is known for his notable performances in the sequels of Harry Potter.

Phelps was born  James Andrew Eric Phelps on February 25, 1986, in Sutton Coldfield, Birmingham, West Midlands, England.  He holds British nationality and belongs to the Caucasian ethnicity. He has a twin brother named Oliver Phelps who is 13 minutes older than him.

This has to be one of the fanciest/biggest banana strawberry smoothie I've ever had. #IThibkTheGuyBehindWantsOneToo #madrid

Phelps is the son of Susan (his mother) and Martyn Phelps (his father). He grew up in Sutton Coldfield, Birmingham, England.

Phelps alongside his brother attended Little Sutton Primary School and the Arthur Terry Secondary School. He spent most of his school time shooting for Harry Potter.

At the age of 14, the twins skipped school exams to attend an open audition. Despite having no experience in acting, they were selected after about six auditions. James Phelps and Oliver Phelps were cast as Fred and George Weasley in the movie, Harry Potter and the Philosopher's Stone and the rest of the 7 Harry Potter movies.

The twins also appeared as brothers in the 5th episode of the 3rd season of the television series, Kingdom in 2009. They starred in a short documentary film named A Mind's Eye. The film was based on the philosophical ideas of Plato.

Both brothers attended the Harry Potter Celebration held in Orlando in January 2014. They attended the event alongside famous celebrities such as Evanna Lynch, Matthew Lewis, and Devon Murray. They also made a Live Cast, where they answered fans' questions and talked about the expansion at The Wizarding World of Harry Potter.

James Phelps has reached the age of 31 now.  He is active in sports along with his brother Oliver. They enjoy golf and play the game regularly. Oliver's handicap is 18 whereas James' is 20.

The twins support rival football clubs in Birmingham. Oliver supports Aston Villa, alongside his late grandfather, while James supports Birmingham City with his father. However, both support Gloucester RFC together.

They both enjoy traveling. They have traveled around the world, touring and attending sports games and events. James loves to play guitar during his free time. James Phelps, as well as his Twin brother Oliver Phelps, are still unmarried.

Both the brothers have a close relationship with several of the Harry Potter cast members including Rupert Grint, Tom Felton, Daniel Radcliffe, and Mathew Lewis. They have attended Radcliffe's Broadway performances, and often meet up with Grint, Felton, and Lewis to play golf.

Apart from their career as an actor, these brothers have shown their active participation in several of the charity works as well. They have planted trees at the National Forest, in Leicestershire. They are the supporters of the Teenage Cancer Trust. They have opened one of the charity's specialist units in Birmingham.

James Phelps and his twin brother Oliver Phelps are both active in charity works. The twins make public appearances in support of music and sports. They attend the V Festival every year, held by Virgin Media each August, as well as the Download Festival, a rock music festival managed and arranged by Live Nation UK in Donington Park, England.

They both took part in a celebrity football tournament called the "Celebrity World Cup Soccer Six," where they participated alongside other celebrity sports fans.

The brothers were part of the Virgin Money Giving drive. Oliver focused on raising money for the RNLI lifeguards and James became involved with the "National Three Peaks Challenge," an event that challenged a climber to climb the three highest peaks in the United Kingdom in a 24-hour span.

The brothers also took part in a skydive competition for Cancer Research UK in Australia on November 22, 2011. The event was held in memory of Harry Moseley, an 11-year-old boy who died on 8 October 2011 after a four-year battle with brain cancer. The amount pledged for their jump stood at 2,525 by December 2011.

The brothers went on Pointless Celebrities on September 7, 2013, to win money for the charity in memory of Harry Moseley. They only managed to win 2,500 in that event.

James Phelps Net Worth and Salary

He has a good income from his acting career and has maintained an impressive net worth of $1 million.