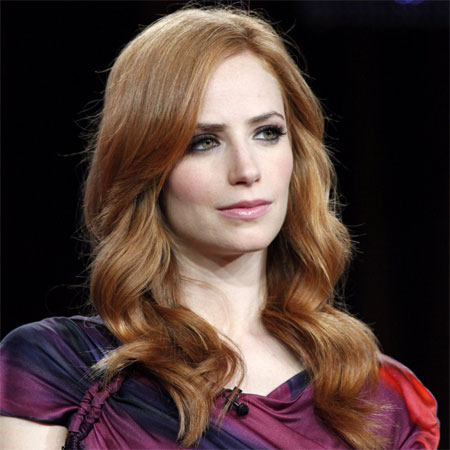 A talented lady, Jaime Ray Newman is an actress and singer. She has starred as Kristina Cassadine on the soap opera, General Hospital. She began performing at the age of 12 in the play A Rosen by Any Other Name.

Jaime Ray Newman was born on April 2, 1978, in Farmington Hills, Michigan, U.S, under the birth sign Aries. Jaime has been seen posing with her proud parents in some shows and events. Jaime Ray Newman is an American and is of white ethnicity.

She went to Cranbrook Kingswood School which is a private school in Bloomfield. In 1996 she graduated from Cranbrook Kingswood. While in there she spent her summers at Interlochen Center for Arts winning the Corson Award for Outstanding Achievement in acting.

She was three years in a row winner in the Michigan Interscholastic Forensic Association. It is a state-wide dramatic competition. In her 16 she founded Apollo Theatre Productions and put up the first show working as both producer and direction.

After receiving positive responses she produced two more shows before graduating her high school.  For two years Newman went to School for the Arts Theatre conservatory affiliated to Boston University.

She then transferred in English and Drama major to Northwestern University. There she founded “Ignition Festival for Women in the Arts” which brought to her the Pulitzer-winning Play How I learned to Drive. She acted and produced in the play.

In September 2000, Newman moved to Los Angeles and there she made her living by performing with her jazz quartet and doing landing parts in various short films as well as making an appearance on The Drew Carey Show with Craig Ferguson, Kristen Wiig, and others. But her career went uphill when she got the role of Kristina Carter Cassadine on General Hospital, the soap opera.

She simultaneously put together her band “School Boy Crush” and played at The Buffalo Club regularly. The club is in Santa Monica. She played opposite Leonardo DiCaprio in Steven Speilberg’s movie Catch Me If You Can.

Other movies that she has had roles in are Logorama and Maid of Honor. She did a play with David Schwimmer, Jonathan Silverman and Tom Everett Scott called Turnaround. It was a Hollywood Satire by Roger Kumble which ran to sell-out audiences for almost the time of four months.

Honored to be part of the Netflix/Marvel family. PUNISHER premiere, NYC. Dropping November 17. Come 'n get it! #punisher #marvel #netflix

She got a recurring role in the critically acclaimed Veronica Mars in October 2006. She also appeared in the TV movie Under the Mistletoe with Michael Shanks in Christmas of 2006. She also has appeared as Grimm in the famous series Castle, alongside Stana Katic,  Nathan Fillion,  Meghan Markle,  and others.

Newman in 2009 appeared as Kat Gardener, a nurse in serialization of Eastwick and in 2010 she had a major role as Dr. Tess Fontana in Eureka and as Vanessa Hemmings in Drop Dead Diva.

She showed up as Cynthia in January 2011 in David Auburn’s revival of The New York Idea at the Lucille Lortel Theatre. She appeared in the American stage Premiere of the Australian play The Gift held at the Geffen Playhouse. As of 2013, she appears in ABC midseason drama series Red Widow. Newman is also a series regular cast in ABC show Mind games.

Jaime Ray Newman has played a lot of movies from which she has accumulated a good sum of wealth. As of 2019, Newman's net worth and salary have not revealed yet.

On April 2, 2012, she got married to Guy Nattiv. Her husband is Israeli-born writer/director. Newman announced in March 2013 that she was pregnant with her first child, a daughter.

2019 started out with us UNPACKING suitcases we spent the whole week packing as Alma got a bad cold and we had to cancel her first trip to Israel to meet her grandparents.  Parenthood, you sneaky thing, I embrace your misadventures with all my heart. Happy 2019 all!