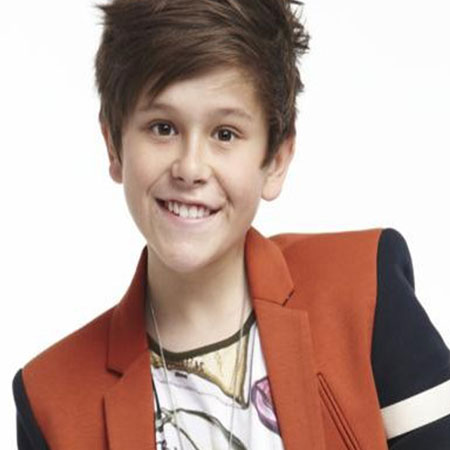 Jai Waetfor is an Australian Singer, actor, and songwriter known for his appearance in the season five of X Factor Australia which he finished as the second runner up. His single Your Eye was a hit which was placed at #6 on ARIA singles chart. Jai even won the nomination for Poprepublic.tv Awards for Favorite Australian Male Artist and Breakthrough artist in 2013.

Jai Waetfor was born on January 25, 1999, in Campbelltown, New South Wales, Australia under the zodiac sign of Aquarius. Waetford shows the character of Aquarius such as deep thinker and highly intellectual who loves helping others. He is Australian by his nationality and talking about his ethnicity, he White.

His mother's name is Alana Dow and father's name is Creedy Waetford. Jai Waetford was raised by his mother and grandparents Hannah and Roger Dow after his father left his mother while he was a child.

Waetford attended Campbelltown Performing Arts High School in his hometown Campbelltown. He didn't complete his high school as he dropped from high school in 2014 to pursue a career in music.

Jai Waetford participated in the fifth season of The X Factor Australia in 2013. He sang Different Worlds by Jes Hudak and an original song titled Don’t Let me Go which made the judges wowed and progress to the super boot camp stage.

On the first day of super Bootcamp, he sang Titanium and advanced to the second stage. In the second round, he sang The Last Request and on the final day of the camp, he performed We Are Never Ever Getting Back Together.

After the super Bootcamp, he made it through to the home visit round and was placed into Boys category which was mentored by Ronan Keating. Waetford sang Always on My Mind in the home visits round and he made his way to the live shows. Jai Waetford reached the final of the show where he came to the second runner-up. Dami Im was the winner of the show where Taylor Henderson was placed second.

What Jai Waetford Did After His Day In X Factor Australia?

After X Factor Australia, he focused on his musical journey and signed with the record label Sony Music Australia. His first song Your Eyes was released digitally in 2013. His first song became viral and was charted at #6 on the ARIA singles chart. After that, he released four Eps; Jai Waetford, Get To Know You, Shy and Heart Miles.

Waetford joined YouTube on June 13, 2012, and has about 890k subscribers. Besides, he also made his appearances in the Australian television soap opera Neighbours on the Seven Network. In 2013, Jai Waetford was nominated for Poprepublic.tv Awards for Favorite Australian Male Artist and Breakthrough artist in 2013.

What Is Jai Waetford's Net Worth?

Jai Waetford's net worth is estimated to be of $3 million as of early 2019. Waetford earns a handsome sum of money as a singer as well as an actor. He has released several EPs as well as worked in some soap opera from which he has undoubtedly received a staggering paycheck.

He finished as the second runner-up of the fifth season of X Factor Australia. After the X factor, he was signed by Sony Music Australia and released an EP in 2013. His a s sociation with Sony as well as his EPs earned him a whopping sum of money which makes him a millionaire singer. Besides, he also runs a YouTuber channel which also is one of the major sources of his earnings.

Successful American singer, actor and songwriter Jai Waetford is currently dating Carrington Durham, an American model, and actress. The duo first met when Waetford was living in Los Angeles and the couple hit it off instantly. They started their relationship in 2015, and since then the lovebirds have been spotted at several public places enjoying their private time together. They often post their romantic journeys and vacations on their social sites.

Waetford and Durham went to Disneyland for their vacation which they also shared with their fans. Even though the couple often relocates to their country for their work, their long-distance relationship is growing stronger and stronger every day.

In the video shown below, the X Factor Australia participant Jai Waetford sits down with GF TV and speaks about his love life and on-screen romance.