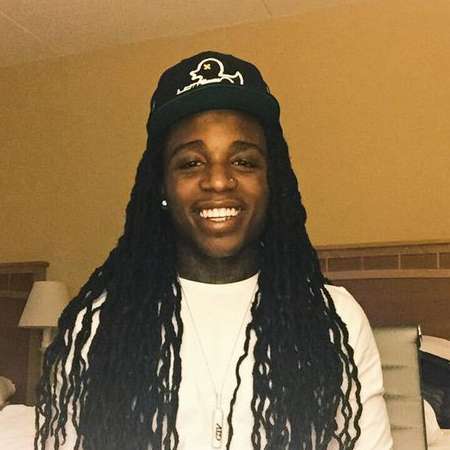 American singer/ songwriter, Rodriguez Jacquees Broadnax is popularly known for his stage name, Jacquees. He is a solo artist but can also be found working with various other artists in the hip-hop music industry. He has worked with several famous rappers. He released his first debut album in 2018 named, 4275.

Jacquees was born Rodriquez Jacquees Broadnax to Rosie Broadnax on 15th April 1994 in Atlanta, Georgia, the United States. His birth sign is Aries.

He is American as per nationality and as far as his ethnicity is concerned, he is African-American. His parents raised her with his siblings. The Georgia-born singer was passionate about singing and music in general from a very early age. At the age of 9, Jacquees was already found if singing and dancing.

He got his influences from movies like “The Jackson: An American Dream” and “The Temptation”. He attended Canby Lane Elementary School. In the fifth grade, he performed the Jackson 5’s, “I Want You Back” in his first talent show ever.

For his performance in the show, he won the first prize which immediately boosted his passion for singing and dancing. He then joined Mary McCleod Bethune Middle School. Even there, he continued taking part in various talent shows. He won every year: two at Bethune Middle and one at Dekalb County Middle School Talent Show.

Jacques's career in the music industry began in 2007 when he was introduced to Orlando Grind by Dexx lee. Grind quickly became his manager and introduced him to Russell Spencer, known by his stage name of “Block”. Block was the founder and CEO of Block Entertainment.

On joining the studio, at first, Jacquees merely blended with the team. He wasn’t given the opportunity to stand out, shine and show his true talents. He was getting discouraged by the fact that there was some much work going on in the studio, but none of them was for him. At that time, his’ sole attention was on Rap, not R&B.

In the summer of 2009, Block finally witnessed the raw talents of Jacquees. Block then shifted his vision towards Jacquees and started working more closely with him. Jacquees gained exposure immediately with the release of his first single “Krazy”. The single featured Grand Hustle’s own T.I., a famous American hip-hop artist of the time.

In the summer of 2009, Block finally witnessed the raw talents of Jacquees. Block then shifted his vision towards Jacquees and started working more closely with him. Jacquees gained exposure immediately with the release of his first single “Krazy”. The single featured Grand Hustle’s own T.I., a famous American hip-hop artist of the time.

On March 25, 2014, Jacquees released his second EP, which was titled 19, independently. The 11-tracked EP debuted at number 15 on the US Billboard 200 for Top R&B Albums. The EP features guest appearances from various famous artists such as Chris Brown, Rich Homie Quan, Lloyd, and Trinidad James.

On October 1, 2014, he signed a recording contract deal with Cash Money Records, which was announced by himself via his social media account. Cash Money Records has several famous artists signed such as DJ Khaled, Lil Wayne, Paris Hilton, Birdman, and some more. He has also signed with Rich Gang management.

Although he has worked with label mates Gorilla Zoe and Scotty, T.I.P, and j-Real, he dreams to work with established artists like Lil Wayne, Drake, Bow Wow, and Chris Brown among others.

Jacques Net Worth And Major Source Of Income

According to Celebrity Net Worth, Jacquees has an estimated net worth of $6 million as of 2019. He earns an impressive amount from his singing career. He also collected much from his songs and album.

Moreover, he also has an online shopping site, sprayground.com where he sold several bags. It is also a major part of his net worth.

The rapper has over 1.5 million subscribers on his YouTube channel called jacqueesmusic as of 2019. From the channel, he earns $10k to $159.9 K a year. He has also a decent fan following on his Instagram with over 4.1 million followers.

Jacquees is yet to be married. But he is in a relationship with his school sweetheart. They started their affair when they were at an early age. Some of the sources claimed that his girlfriend's name is Nesha whereas some claimed her name to be Stanehsha. He, however, has not confirmed yet.

#TSRBaeWatch: #Jacquees and his high school sweetheart vacationing in Jamaica for their birthdays

The couple is continuing their affair for a long time without any news about their breakup.

While Jacquees may not be the most religious person of his genre, he definitely believes in God and he frequently mentions that he prays to God every night and believes God is at his side in every path of his journey.

Check out the five facts about Jacquees"