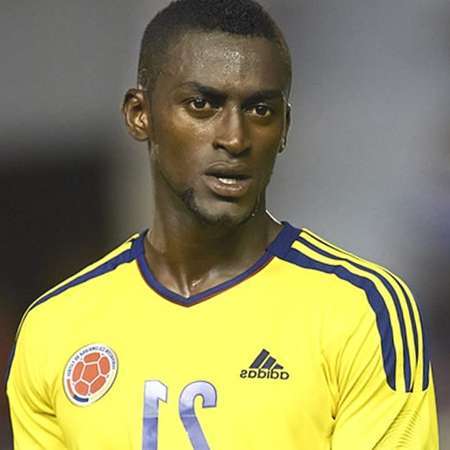 Jackson Martinez or simply Jackson is the name of a Colombian Professional Football player who plays as a striker in the football arena. He is an essential player of the Columbian national team who as of 2018, plays for Portimonense on loan. Because of his dance-like moves on the pitch, Jackson is famous for his nickname 'Cha Cha Cha'.

Jackson Arley Martinez Valencia is the full name of Jackson. He was born in the year 1986 October 3 at Quibdo, Colombia. The 32-year-old striker owns the height of 185 cm and Body weight of 76 Kg. He was born and brought up in Colombia where he finished his education. There is no other disclosed information on his personal matters which includes his relationship status as well.

Jackson Martinez has earned the nickname of Cha Cha Cha for his dance-like moves in the pitch. He is a center Forward who can finish off with both feet. Jackson Martinez has got the super killer instinct and the shooting skills which leads him to get the goal scores. He has got very good speed and work rate in the game. His heading skill is also outstanding. The dance-like moves of this player confuse the opponent which is one of his natural qualities. He is good at dribbling the ball. However, he is not good at tackling the ball so often stay back to dive in tackles.

Jackson started his youth career from the Independiente Medellin. And from the same team, he debuts his professional career from the year 2005. He appeared in 136 matches bagging 55 goals for the team. He helped the team to lead to their 5th league title. He had a good start of his career. He even spent the good seasons in this club and made a move to Mexican Primera Division Club Chiapas in 2010. He had performed very well in this club as well. He scored 9 goals in the first season from this club standing him fourth in the top scorer's table. Jackson Martinez became the key player in the Copa Libertadores 2011 leading the team to quarterfinals. He appeared in 58 matches from the team making 28 goals during his tenure with this club.

Jackson Martinez began to play for his Nation Colombia from the first team of Colombia National Football Team from the year 2009. He appeared in 26 matches from the team making the goal score of 8 for the team. After the end of a contract with Chiapas, he joined the Portuguese Club Porto in 2012. He is the Current Team of Porto since nearly 2 years from squad No.9. He has performed extraordinarily in this club making 45 prominent goals in 59 matches.

Jackson Martinez is a strong player when it comes to the current team of Colombia National Team. His Cha Cha Cha moves became beneficial to Colombia in 2014 FIFA World Cup, where Colombia played FIFA after 16 years.