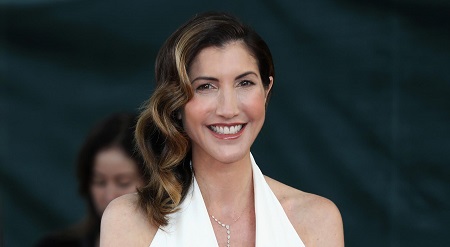 Jacqueline Samantha Titone, better known as Jackie Sandler, is an American actress and model, who has appeared in several TV series including Real Job, The Goldbergs, Marry Me, and The Ridiculous 6.

She has been married to legendary actor Adam Sandler with whom she shares two children, two daughters; Sadie Sandler and Sunny Sandler and resides in Los Angeles, California.

Jackie Sandler was born Jacqueline Samantha Titone on the 24th of September 1974, in Florida under the birth sign of Libra. She has been actively involved in the acting fraternity since 1999 when she was young. She was born to her mother Lila Titone and her father Joseph Titone.

Jackie started her career as a fashion model. She started modeling during her high school years and started working for national and international fashion companies as a high school student.

She first tried her luck in acting with the help of her friend and fellow actor Rob Schneider. She appeared first as an actress in the movie Deuce Bigalow: Male Gigolo. Later, she portrayed the role of Sally in the movie Big Daddy.

Though she had a very small role in the film, it turned out to be the biggest movie of her life as she met her future husband there.

She has also appeared as Veruca in Just Go with It, Hotel Transylvania as Martha, and Jennifer in Pixels and in Deported alongside Whitmer Thomas, Megan Park, Micky Gooch Jr., Fortune Feimster, and other stars.

Jackie Sandler has an estimated net worth of $50 million according to celebrity net worth, as of 2021. She earned a great amount of net worth from her career in acting as well as from her modeling career.

She hasn't revealed her income and earnings details to the media, however, as she is a famous actress and model, we can speculate that she earns a pretty impressive amount of money from her career.

On the other side, Adam Sandler possesses a $420 million net worth. His salary is $20 million per movie. The legendary actor has racked up the major portion of his aforementioned fortune from his work in numerous successful movies and TV shows.

Where The Multi-Millionaire Couple Resides?

The duo currently resides in their Los Angeles house. Adam reportedly bought the house from actors Kurt Russell and Goldie Hawn for $12 million.

Jackie's husband made a whopping $1 million donation to the Boys & Girls Clubs of America in 2007 which made headlines in those days.

In 2012, the actress voiced the character of Martha in the animated movie Hotel Transylvania which collected $358.4 million.

Jackie and her husband Adam Sandler have supported several charitable works. In 2007, the couple donated $1 million to the Boys and Girls Club in Manchester, New Hampshire.

The couple has also supported various foundations like Ante Up For Africa, Autism Speaks, Life Rolls On Foundation, and Toys for Tots.

Jackie Sandler has been married to the legendary actor Adam Sandler since 2003. The couple met on the sets of Big Daddy in 1999. In 2000, the couple started dating and dating until getting engaged in 2002. On June 22, 2003, Adam Sandler and Jackie married in a closed ceremony.

Their wedding made headlines and was followed by her fans all around the world and the marriage was covered hugely by news tabloids across the world.

Jacqueline Titone converted to Sandler’s religion, Judaism in 2000. She also changed her surname from Titone to Sandler.

The pair still seems very much in love and their cute Instagram post agrees with our statement. They have two children together. The two welcomed their first child, a daughter named Sadie Madison Sandler, on May 6, 2006, in Los Angeles. And their second child, a daughter Sunny Madeline Sandler, was born on November 2, 2008.