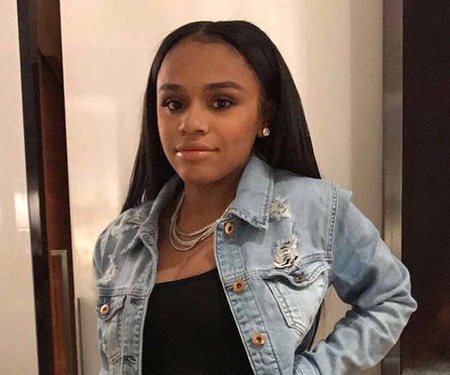 Mayweather is the daughter of an American boxing champion Floyd Mayweather and businesswoman/Television star Melissa Brim. She became headlines after her father Mayweather gifted her a whopping 18-carat ‘Canary PRISTINE’ ring that worth $5 million. She is famous on social media, where she has about 770k followers on Instagram.

Iyanna Mayweather was born on May 20, 2000, in Nevada, the United States of America. She was born under the zodiac sign Taurus which defines the personality like reliable, patient, practical and responsible.

Iyanna holds an American nationality and belongs to mixed ethnicity. Her father Floyd Mayweather Jr, an American boxing champion and her mother Melissa Brim, a businesswoman and television star. Iyanna was one of four children of Floyd. She has two half-brothers, Koraun Mayweather and Zion Mayweather, and a younger half-sister, Jirah Mayweather.

Iyanna is just 18 as of 2019 so she is taking her time to start her professional career. But recently, she released a music video titled ‘Oh Okay Remix’ on YouTube. The video was released in October 2018 on her YouTube channel and her video and rapping style of her received multiple mixed reviews.

In the video shown below, her music video Oh Okay Remix is presented-enjoy it!

Talking about her social media presence, she is active on Instagram. She has over 770k followers as of February 2019 on her Instagram account. She joined a YouTube channel on June 20, 2018. She has only released two videos on her channel.

Iyanna just completed her education and received a diploma certificate. She has not started her career yet so her net worth is still under review. Besides, her father Floyd Mayweather Jr. has the net worth is estimated to ranges from $700 million to nearly $1 billion. As a boxer, he collected some decent sum of money and even topped the highest-paid athlete’s lists of both on Forbes and Sports Illustrated.

On his daughter's 18th birthday, he gifted her a huge 18-carat ‘Canary PRISTINE’ ring that worth $5 million. On her 16th birthday party, singers Drake and Future performed their song for Iyanna. She also received a Mercedes 550 S-Class and a G Class on her 14th birthday, where the Canadian singer Justin Bieber was one of the performers on her birthday.

Iyanna has not opened her mouth regarding her personal life and boyfriends yet. Despite being a daughter of a renowned athlete, Iyanna stays under the radar for most of the time. As of now, there is no information regarding her relationship status and past affairs.

Allergic to being broke

In her free time, she loves talking with her mother. Her mother had an on-and-off relationship. Her mother and father were living separately when she was born but after a year of her birth, Floyd came back to Melissa and gave their relationship a second chance, however, the couple again separated in 2012.