Is Man Finds Food actor Adam Richman married? How Did He Lose 70 Pounds? All Details Here 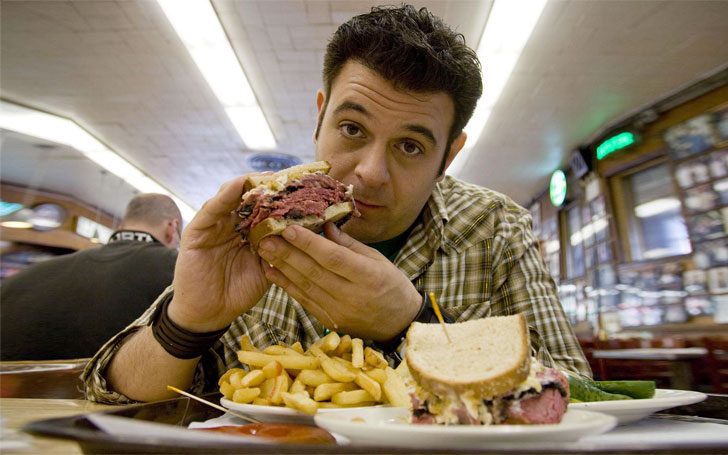 Aren't you surprised with the drastic change in the weight of Adam Richman who is an American Actor and TV personality? The actor faced health problem and has now lost almost 70 pounds of weight.

Richman's professional life is open book for all his fans but what about his personal life? What is his current relationship status? Let's find Out.

Is Man Finds Food actor Adam Richman Married Or he is single?

Currently, Man Finds Actor Adam Richman is single. He is not married and also he hasn't confirmed anyone as his girlfriend. However, there are some interesting rumors about his dating life.

Adam Richman in a gray suit

In his recent Instagram post on 1 May 2017, Richman shared a picture of his get-together with American Journalist Tamron Hall  where he  writes "Reunited and it feels so good." Due to this post, many of his fans were confused if they two are dating.

Forty-three years old Richman was rumored to be dating British pop singer Myleene Klass in 2015 when the duo performed as judges for the 2015 BBQ champ show.

The fuel was added to the rumor as they were appeared holding hands in London. Then they appeared in a joint interview about their upcoming show in on 30 July 2015 where Richman praised his co-host and he also shared that Myleene Klass invited him to her house.

In an interview with Mirror.co.uk on 26 July 2015, when asked about her relationship with Richman, Klass said

"working with Adam Richman is so much fun. He’s so intelligent, and is so generous, always spoiling me with gifts."

But she also said  "Everyone is trying to set me up with Adam. Don’t you start!" when a hint of Adam being single was dropped.

Richman Lost 70lbs Due to his Health Problem

Richman lost a drastic amount of weight which everyone might have noticed as he reappeared to the TV show 'Man VS Food’ that started from 2008 to 2012 looking exactly 70 pounds slimmer. He was successful to gain his desired weight due to a strict diet that benefitted his medical condition.

When asked about his surprising change in weight he said:

"I would look at the way I looked on camera and I just wasn't pleased,"

His appearance was not the real reason that bothered him but it was a health disease, 'Aponeaa' that he was going through. So, he followed a very strict diet plan which was focused on grain and vegan food.

He also shared that for 3 months he was a vegan and cut back even on peanut butter. Thus due to his strong determination, Richman lost around 70 pounds of weight.