Is Jolene Van Vugt Married? Know about her Relationship, affairs and dating history. 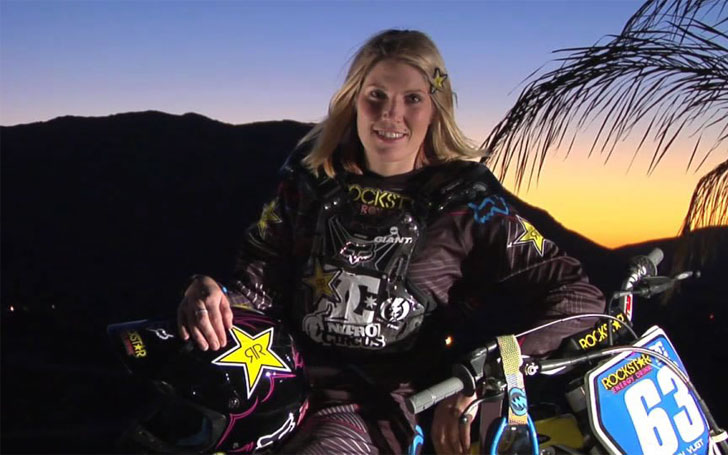 Jolene Van Vugt is first CMRC Women's Canadian Motocross National Champion. She is best known for the first woman to backflip a full-sized dirt bike and a holder of multiple Guinness World Records.

Jolene Van Vugt is married to Jim DeChamp. Here we will exclusively discuss her married life and dating history. Do they have any kids? To know all about the two, stay with us.

Jolene Van Vugt, 36, was engaged to her co-star Jim DeChamp on Monday, October 29th, 2012. Sources reported that the couple started dating a few years ago their engagement.

Van Vugt and Jim tied a knot in June of 2013, in an intimate wedding ceremony. The couple has been leading a healthy relationship. But, the couple yet to has any child.

Van Vugt once became part of rumor for walking with Travis Pastrana. Jolene was often spotted going out to the movie with Travis. Pro Motocross Racer, Jolene also dated Ryan St. Amand prior to her affair with Jim DeChamp. Ryan St. Amand is a native of Sicamous, BC.

Jolene features on the MTV television series Nitro Circus. In the year 2003, she became the CMRC Ladies Ontario Provincial Champion. Canadian motocross rider, Jolene Van Vugt has a net worth of $2 million.

In 2005, Jolene established herself as the first woman to backflip a full-sized dirt bike from a ramp to dirt.

However, she won the CMRC Women's Canadian National Championship again in 2006. She even set a female backflip distance record for 60 feet. In 2007, Jolene became the first female to backflip a dirt bike into the Grand Canyon.

In September 2015, Van Vugt was seriously injured lacking reconstructive surgeries to her face and an extensive recovery period. Nitro Circus is an "action sports collective" led by Travis Pastrana traveling around the world riding dirtbikes, base jumping, and performing stunts.

Very excited to do a lot more @polarisrzr @terracross_racing in 2016!! Photo captured by @street_bike_tommy at Haydays in Sept, just a few days before my accident. #terracross #racing #rzr #polaris #polarisrzr #rockstar #rockstarenergy #63