Multiple Guinness World Record holder Jolene Van Vugt is a professional Canadian motocross racer. She is the first CMRC Women’s Canadian Motocross National Champion and the first woman to backflip a full-sized dirt bike. She has also shown her talent in the television show Nitro Circus.

Jolene Van Vugt was born on September 17, 1981, in London, Ontario, Canada to Dutch immigrant parents Bill and Tina Van Vugt. She has one sister, Michelle Van Vugt and one brother, Billy.

Her father Bill, a young at heart enthusiastic motocross racer, greatly influenced Vugt to take up motocross. However, her mother always wanted her to become a ballerina or a figure skater.

It's been a few birthdays since us kids bought this saaaweet radio for our Mom for her birthday!! Wishing the Happiest Birthday to my Amazing Mother!! OXOXO #happybirthdaymom #family #love #80sphoto #vanvugtfamily

Jolene holds Canadian nationality and has a mixed ethnical background.

Jolene Van Vugt was enthusiastic about biking, driving and racing from childhood. It wasn’t until the age of 11 she convinced her father to buy her a dirt bike, after much discussion about her ever-changing interests.

At the age of 14, she was provided the challenge to either practice, race and give it up for good or take motocross sincerely. She focused full-time on motocross, her talent and dedication soon became obvious as she quickly rose to the top ranks of Canadian women’s motocross.

Jolene became a part of the TV show Nitro Circus in 2006 which was broadcasted by Fuel TV and became a full series broadcasted by MTV in 2009. The year 2006 was a milestone year for Van Vugt, not only for her racing efforts but also for her success of being the first female to backflip a full-sized dirt bike over 60 ft ramps to dirt.

By 2008 Jolene recorded her name in Guinness World Records for the first female to backflip a dirt bike and for a longest female backflip. Later in 2012, she did Catwoman’s driving stunts in the movie The Dark Knight Rises.

In September 2015 she was seriously injured requiring reconstructive surgeries to her face and kept her out of action for a long period.

The Canadian rider Van Vugt has a net worth of $2 million. She is able to earn a fair amount of money from her career because of her dedication and hard work. As she is the holder of many Guinness World records, earning a good sum.

As of 2015, a professional motocross racer for the twentieth place earns an annual salary of $36,295 and $52,700 cash prize and bonuses for the tenth place. The average professional MX salary is around $90K however with the variation depending on the rider standings.

You May Also Like: Swedish Profession Ski Racer Jon Olsson Earns Well From His Profession; Has Managed a Satisfying Net Worth

It seems that she is not that open about her love life and also there is no information regarding her getting married to anyone.

However, there are rumors that Canadian stunt performer, Van Vugt is married to her rumored spouse Jim DeChamp, a star of the hit MTV show Nitro Circus. The rumors could be true as both are often seen together. They were spotted together in the 2009 VMA awards as well. 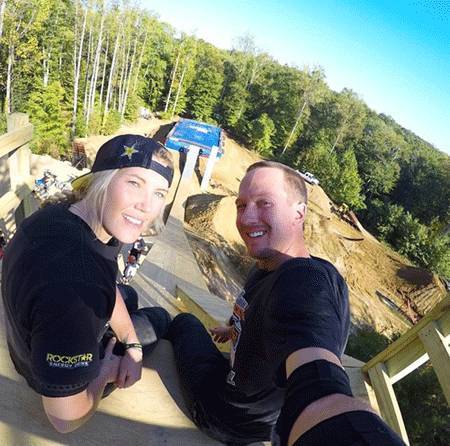 Although Van Vugt is yet to confirm these rumors so it is difficult to reach to the conclusion.

You Would Be Interested In: Who is Canadian model Nicole Williams dating these days? Has she got any boyfriend?