Is American Footballer Rashad Jennings In A Relationship? His Affairs And Dating Rumors 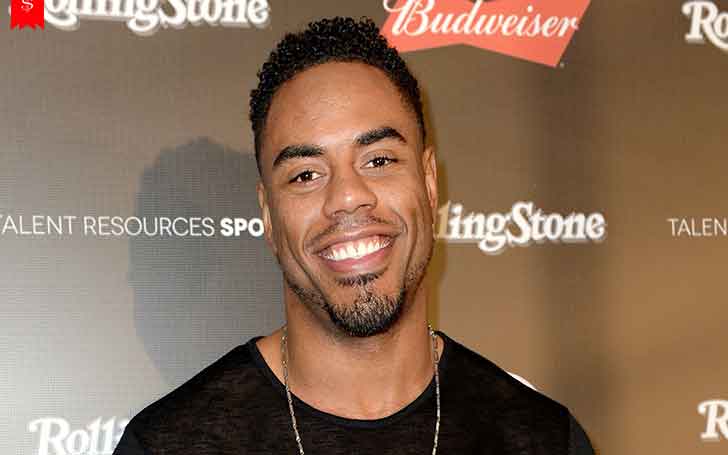 Rashad Jennings is a former American football running back who also played for the New York Giants and Oakland Raiders. He gained further recognition after winning the Season 24 of Dancing with the Stars with his dancing partner Emma Slater.

With millions of fans on his side, there are people who are curious to know about his romantic side. Jennings once revealed about having a girlfriend in an interview. So who is the lucky one that he mentioned? Is he still dating her or is single? Find out here!!

Is Rashad Jennings Dating Someone? Details Of His Relationship Status

One of the most frequently asked queries about the handsome hunk, Rashad Jennings, is about his love life.  Well as per the reports, he is still enjoying his singlehood.

Jennings time and again has cleared views about his girlfriend to his fans through various social media in his own way.  Back on 23 June 2017, on his Instagram post, he clarified whether he is single or mingled?

I constantly get asked if I have a girlfriend. Well, I found the one! Here she is…

On the Instagram video, he shared, as a joke, Jennings showed a puppet as his girlfriend. That's not all, he again took on Twitter in March 2018.

Time to chop it up about dating relationships. What does leading someone on, in the sense of giving impressions of a possible exclusive relationship, when you really don't want one, look like?  #ShadQuery pic.twitter.com/CUapRZMjhD

Jennings believes in spreading love both literally and figuratively. Though Jennings doesn't have a Valentine, he celebrates it with his mom, very special lady of his life.

In an interview, he expressed his opinion on Valentine day.

“I love Valentine’s Day, just like I love every other holiday because there’s a different aura in the air.”

On 2018 Valentines day he gave red roses personally standing in the Times Square, New York. He started to hand out the symbol of love to his fans from 11 am to noon. Later in the night, he spent his time with his mom.

Past Affairs Of Rashad Jennings And Mom's Approval!!!

Rashad Jennings, 33 years old, might get in a relationship but it is all up to his mother's approval. In an interview with the PEOPLE on 26th May 2017, Jennings revealed that any woman that will come in his life has to be approved by his mother.

My mom knows me very well and she knows anybody that I give the okay to be around, she’s gotta be okay. My mom, she’s gotten to know me over the years: ‘My son doesn’t talk to just anybody.’ So she gives the thumbs-up.

Whoever comes in the door, she’s already coming in the door with a thumbs up because I brought her.

In the same interview, Rashad disclosed that he once had a longtime girlfriend. He also said, he was the one to express his feelings first to her, but later in, 2014 they broke up. He added:

"We went through each other’s growing stages and phases and shared all of those moments with each other: mistakes, happy times, sad times."

Rashad is currently living his single life keeping himself busy with all the work. He is low in profile on social media platform about his love life.