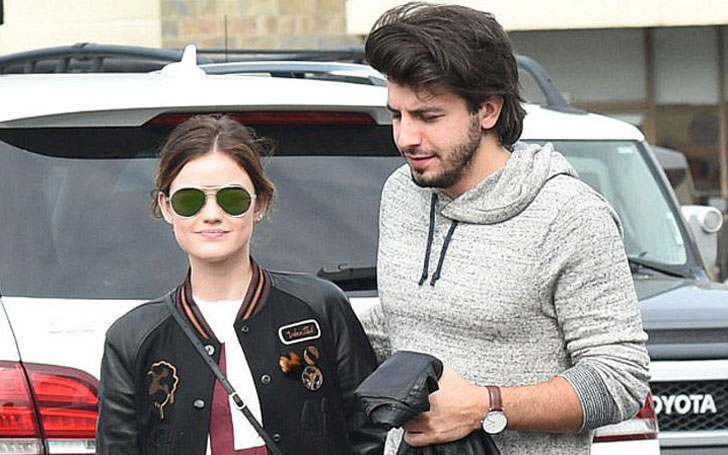 Lucy Hale is former Disney star and now a lead in Freeform's (previously ABC family) drama series Pretty Little Liars. She started out as a singer and then proceeded to act. Her personal life also makes major headlines. She is dating Anthony Kalabretta, the couple is said to have been dating since 2015.

Time and again rumors of a split have surfaced, however, Lucy and Anthony have maintained their relationship through it all.  There were widespread rumors of their breakup, it was being reported that the couple had split in January 2016. However, she kept posting pictures of her alongside Anthony on Insta and proved everyone otherwise. Daily mail later confirmed the couple was still dating.

Yes! The PLL star Lucy Hale or Aria as PLL fans better know her as, and Anthony is still dating and going on strong. Despite the rumors of their split, the couple has managed to survive it all and cross 2016. They have now almost been dating for 2 years. They were reportedly seen together for the first time in the June of 2016 at a Dodgers game.

Lucy Hale and Anthony Kalabretta posing for a Selfie

Did Lucy Hale and Ian Harding (Ezra Fitz of PLL) ever date?

The on-screen chemistry of Aria and Ezra on PLL made fans swoon over the couple inspiring various fan fictions worldwide. Their chemistry was so good that the rumors them dating started to circle around. However, Ian and Lucy have claimed that they are only close friends and even go to each other for advice all the time. Does Lucy Hale have any spat with her PLL co-stars?

The cast of PLL getting matching tattoos together.

We see pictures of 5 of them together all the time on social media and news. However, fans are quick to notice any spats and feuds. And many have speculated that Lucy Hale is always left behind in the group of girls and is actually hated by 4 of the girls. But these are fan theories and fan theories go all over the place. Some of them do have pretty interesting reasoning though.

How active is Lucy Hale on social media?

Lucy's Instagram and Twitter are frequently updated. So, if you want to keep in touch with her, it's a good idea to hit that follow button.

Sisters ??here's to our last "fraturday" together ...

The last season of PLL (season 7) will air in 2017. Finally, we'll, all know who the infamous character A is. And as far as Lucy Hale is concerned, she is doing great with Anthony and looking better than ever.