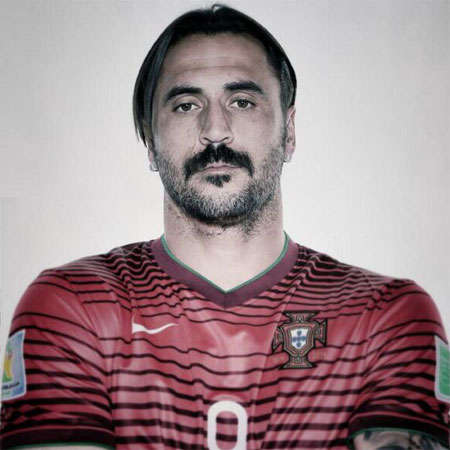 The professional Portuguese footballer, Hugo Miguel Pereira de Almeida had a shaky start at the beginning of his football career but later he appeared in two word cups and also played many European Championships for his nation Portugal, thus enlisting his name in the history of Portuguese football. His current team is the Be?ikta? J.K. in the Süper Lig, as a centre forward.

Born on May 23 1984 in Figueira da Foz , Almeida , Hugo first started his youth football career in 1997 at a very tender age for the club Associação Naval 1º de Maio ( commonly known as Naval ) based in Figueira da Foz , Coimbra District .In 2000 Hugo was later signed to the Football Club Porto based in Porto. His youth career ended with not much success. Later from 2002 to 2005 he was in the club Porto B where he made his first division debut in a 2-0 home win over S.L Benfica on 21 september 2003. While in Porto B Hugo managed to appear in 25 matches and delivered 21 goals. In the same year Hugo was in a loan with Uniao Desportiva de Leiria based in Leiria.  Hugo appeared in 13 matches and delivered 3 goals while he was there. Later again in the same year he came back to Porto for the 2005-06 campaign and stayed there till 2007.Hugo managed just 4 goals in 33 appearances. Out of these goals, the most prominent one was the 35- meter free kick against Inter Milan in a 1-2 loss.

In the 2006-07 season, he was loaned also to the Bundesliga’s SV Werder Bremen for a year. Out of a total 41 appearances, he scored ten goals, including a spectacular shot in a 1-2 home loss against RCD Espanyol in the UEFA Cup semi finals whereby his shot floated over the goalkeeper and into the net. Following this, owing to his lesser chances with Porto with the arrival of new strikers, he signed a four-year permanent contract with the club Bremen with a salary of 4 million Euros.

Hugo’s skills were definitely seen in Bremen after the departure of Miroslav Klose and he started the 2007-08 season with a blast. He scored seven times in his first 12 league games, which included two goals in the win against the defending champions VfB Stuttgart. The season was finished off with him scoring a total of 16 goals in all competitions, including 11 in the league.

As for the 2008-09 season Hugo scored a total of nine goals in the league leading his club to being the cup winners. He netted two more goals in the Champions League and was named the Man of The Match. When Werder Bremen was demoted to the UEFA Cup, Hugo played eight games with one goal and the team went into the finals. However, he didn’t get to lay the decisive game owing to a yellow card he obtained.

On the 2009-10 season Almeida netted seven goals in a total of 11 performances in the domestic league. Bremen finished third thus qualifying to the Champions League play-off. He started off the 2010-11 campaign with six goals in the first ten league games. Before 28th November, he had netted a total of nine goals with scoring three goals in a home win against FC St. Pauli. On a total, his 21 appearances yielded 11 goals.

Almeida next joined the club Besiktas J.K in the Super Lig in a three and a half year contract with a salary of 2 million Euros. Internationally, Almeida has played in every level of the competitions including the under 15 to the Portuguese national team. His full debut was in a friendly against England in 18th February 2004. Hugo also contributed on the winning of the 2003 Toulon Tournament by Portugal, including the 2004 and 2006 UEFA European under 21 Football Championship. Almeida was also called for Portugal’s final three qualifiers of the UEFA Euro 2008 and he contributed his first two international goals thus making the nation clinch a tournament spot.

Almeida also scored in a win against Malta on 6th September 2008 in the 2010 FIFA Cup qualifiers. He was also selected by new manager Paulo Bento for the Euro 2012 squad as a third choice in the quarter finals against Spain.

Almeida has a height of 6.3 feet and a weight of 93 kg. His net worth is estimated to be of 2.1 million Euros and his spouse is Andreia Almeida. They have two children together who are both girls. Having had contributed innumerable goals in his history as a footballer, he still remains a very important choice as a striker, both for his national team as well as for the clubs he works in.