How is Golfer Cheyenne Woods related to Tiger Woods? Find out more about Cheyenne's parents... 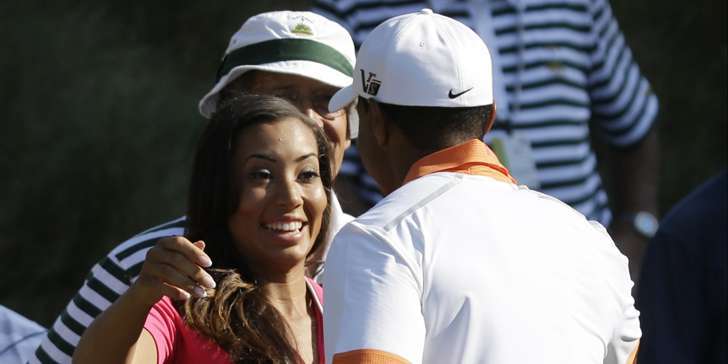 Cheyenne Woods who recently won the Volvik RACV Ladies Masters in 2014 share same family heritage that Golf legend Tiger woods does. She belongs to the Woods family and is the niece of Tiger Woods. Cheyenne was born on July 25, 1990, in Phoenix, Arizona to Earl Dennison Woods Jr. and mother Susan. She shares a mixed ethnicity as her father is an African American and her mother belongs to the white community.

Growing up in a house in Pheonix with bi-racial parents is always challenging to a young child. So, her mother took her to a Minority club to increase her self-confidence. Seeing her uncle on TV, She started her amateur golf career at the early age of three. She was greatly supported by her Grandfather who is also a golf star and is still making the family proud by winning some big trophies too.

Here are some of the interesting facts about The 25-years-old new star from woods family.

Cheyenne woods is a blood relative to Tiger woods, she is niece to Tiger woods. Her father Earl Dennison Woods Jr. and Tiger woods are sons of same father but from different mothers.Tiger has personally stated that he is very proud of his niece's progress in the game on one of his interviews. This is a rare image of Cheyenne with her uncle and former golf star Tiger woods.

It looks like the woods family never run out of Gulf talent. Her uncle ruled the world of sports for more than a decade and now we are all surprised to know that there is another star in the family.

2. Started Golf at the early age of four

Her grandfather who was a recruiter for golf talent at IMG surely saw a talent in the young grandchild so he wrote a recommendation for Cheyenne's selection as a young golfer to IMG and after a trial, she was selected as an amateur player. She is a great admirer of his uncle but she expressed that she wants to be known for her Golf Skills not just by her last name in an interview with The Guardian.

Earl Woods was   not only Cheyenne's grandfather Earl was her first coach too. Earl believed that his granddaughter will grow up to become a great player in future. He wrote a letter to IMG when Cheyenne was three and requested the jury to hand it over to her when she is recruited to IMG and she actually received it from the jury which hangs on her wall just like a trophy today.

It was a huge moment for me because my grandfather passed away six years ago, so to see that report – in his handwriting – it was really special. I had it framed and everything. I’d heard about it, I knew about it and then the day finally came, like he said. They’d kept it on record for me all that time. When they gave it to me it was surreal.

Cheyenne is doing fine with her golf career and she was seen partying with Drake on some concert she attended.

4. The sixth African-American Women to Play in LPGA Tour

Making up to LPGA is a big deal for everyone but being sixth of total women from the African-American community is more like achieving the impossible. She was accompanied with Sadena Parks another AFrician-American Golfer LPGA the same year as Woods did to make the total count of six.

Cheyenne attended Xavier College Preparatory for high school and she won Arizona 5A National Championships in 2006 as well as in 200. Her sports enthusiasm got her admitted into Wake Forest university's golf program where she played for Demon Deacons.Famous golfer Jack Nicklaus is also a Wake Forest graduate. She sharpened her skills and started up for bigger Golf tournaments.

As an amateur, Cheyenne has won more than 30 amateur tournaments. She won the famous ACC championship in 2011 as a Wake Forest's candidate and also set a new record of lowest scoring average which no women's golf team have ever achieved. She qualified for US women's open in 2012. She won  The SunCoast Ladies Series in 2012 which was her first win as a Pro-contender. She was also able to register as a winner of Volvik RACV Ladies Masters in 2014.

In 2012 from  she graduated Wake Fore as an All-American & All-ACC team member for the university and was declared pro immediately after her graduation. After graduation, she was recruited for LPGA in December of 2015.

Her first international trophy amateur trophy was at 2014's Australian Ladies Masters tournament. She is on the touring list of LPGA 2016 recently.Cheyenne is doing fine with her golf career and she was seen partying with Drake on some concert she attended.

7. She is Sponsored by Nike:

Like her uncle, She is also sponsored by Nike which was Tigers biggest sponsor. She is featured in a commercial by Nike with same juggle signature of Tiger woods. She has shown her appearances in many magazines and digests like as Golf Digest, Golf.com and Golf Magazine.