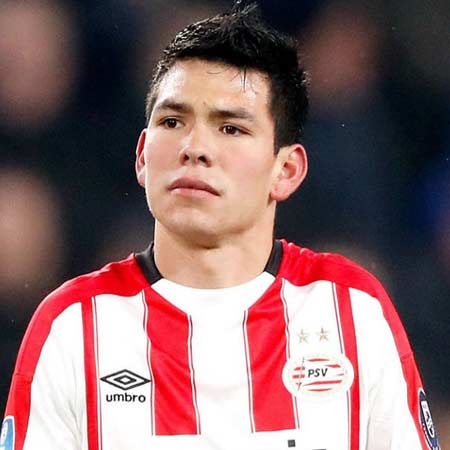 Known as "El Chucky" due to his horror pranks on teammates, it has been a year since Hirving Lozano haunted defenders of Dutch league through his pacey skills and technical finishing. He was given the name El Chucky during his youth days as he used to hide under the bed of his teammates, jumped and scared them just like the Chucky Doll in the movie. Hirving Lozano actually plays on the right side but can also play as central forward. Produced in Mexico, Hirving Lozano was born to be a star as he scored in just five minutes in his professional debut at the age of 18. Since then he has been terrorizing the defense of his opponent team. His amazing performances from Club Pachucha earned his move to Dutch club PSV Eindhoven. In his first season at PSV Eindhoven, he helped them to win Eredivisie league scoring 17 league goals. He is already the star of the team and fan favorite among PSV Eindhoven supporters. Rumors suggest that he is the transfer target for Arsenal and we will see in the future how his El Chucky status would affect the Premier league. He played in the World Cup 2018 and scored a goal against Germany in their first match.

Hirving Lozano was born Hirving Rodrigo Lozano Bahena on 30 July 1995 in the capital of Mexico, Mexico City to father Jesus Lozana and mother Ana Maria Bahena. He has a younger brother, Bryan Mauricio Lozano Bahena who is also a professional football player and plays for Mexcian outfits Club Universidad Nacional.

He started playing football from FC Pachuca and after 5 years of training with the club, Lozano was promoted to youth ranks of FC Pachuca in 2009. He made Liga Mx debut (Mexican Leauge) as a substitute on February 8 on 2014 against Club America.  After appearing as a substitute Lozana scored his debut goal and Pachuca won 1-0. In 2014 Clausura, his debut cup tournament he scored the last goal in a 3-2 win. However, Pachuca finished as runner-up as they lost in return leg by 2-0. 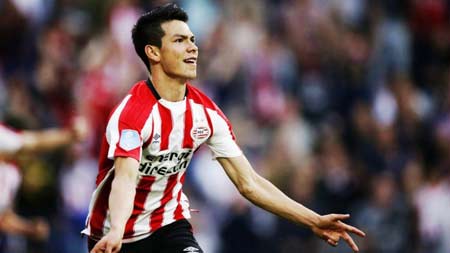 Pachuca again reached the final of Clasura in 2016 which they won by 2-1 against Monterrey.  The win against Monterrey ensured Pachuca to be selected in next year's Champions League version of South America known as CONCACAF Champion's league which they won by defeating another Mexican club Tigres UANL. In that tournament, Lozano scored eight goals in eight games and was awarded golden boot as competitions top scorer.  In his total of 149 appearances for Pachuca across four seasons in all competitions, he scored a total of 43 goals.

It was rumored that Lozano was a transfer target for both Manchester clubs, City and United but after a long chasing, he was signed by Dutch club  PSV Eindhoven instead. On June 19, 2017, he was signed by PSV on disclosed fee later reported to be around $6 million in a six-year contract until 2023. Lozano's debut game for PSV came in Europa League qualifier against Croatian side Ojasek.  He made his league debut on 12 August 2017 against AZ Alkmaar in which he scored in a 3-2 win. His scoring streak continued in next two games for which he was awarded Player of the month for August.  In his debut year at PSV, he won the Eredivisie league title. In his 33 games in debut season at PSV across all competitions, he scored  19 goals.

Though just 22 years of age Lozano had a glittering International Career, he was included in U-20 Mexican team which participated for 2015 CONCACAF U-20 Championship. In the first game, he scored two goals against Cuba with 4 assists. Mexico later won the tournament and Lozano finished the competitions with five goals. He was also included in Summer Olympic squad in Rio de Janerio but was sent off in stoppage time after shoving a Korean Player in the third game in which Mexico was eliminated. 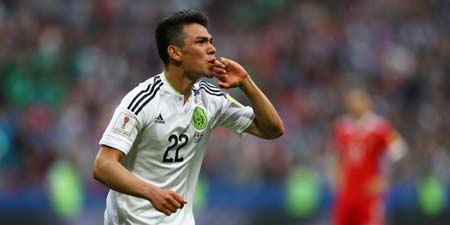 In February 2016 Lozano received his first call for Senior Mexican team by coach Juan Carlos Osario. He played his first match for Mexican senior team against Senegal in which he provided assistance for the second goal in a 2-0 win.  Lozano scored his first international goal against Canada in 2018 FIFA World Cup Qualifying match which they won 3-0.  He had also featured in 2017 FIFA Confederations Cup scoring in the final group game against Russia.  In his 25 appearances for the national team, he has scored seven goals.

He is included in the 23 man squad of Mexico national team playing in the FIFA World Cup 2018.

Hirving Lozano's Net Worth And Salary

Lozano was transferred to Pachucha to Dutch club PSV Eindhoven for approximately $9.5 million. Since then due to his stellar performances in the Dutch league, his market value has risen to $26 million. He receives an average salary of $317000 per year from PSV Eindhoven. Still young, he has potential to earn more money if he makes move to top clubs of England, Spain or Germany. Apart from his salary at PSV, he also earns a fair amount of money from his endorsements with Nike. His estimated net worth is $2.5 million. It is rumored that he is a transfer target for Arsenal FC for approx. $40 million.

Lozano is married and has two children. Following his move to the Netherlands, he and his wife both are taking Dutch classes. They are well settled in the Netherlands and also have bought a family dog. He lives in Eindhoven with his family. According to his Mexican coach, he is very low key and down to earth guy.