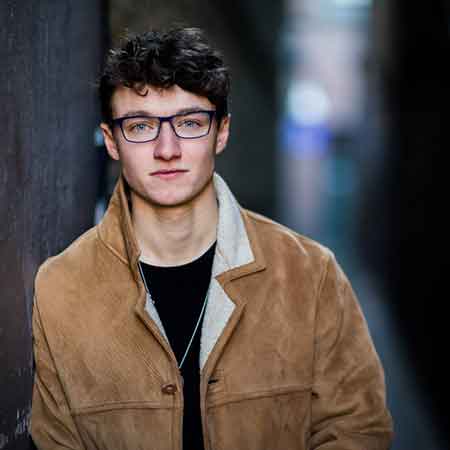 Model turned actor, Harrison Osterfield is a Teen sensation who made his acting debut in a short film, Trepidation in 2014. He is popularly known for his work in Spider-Man: Homecoming (2017) and Avengers: Infinity War (2018). His role in a dark comedy TV series Catch-22 also brought him further acclaim.

Harrison Osterfield was born on July 4, 1996, in England. His birth sign is Cancer which defines his personality as caring, ambitious, creative people who are open-minded and endlessly imaginative. He has a younger sister, Charlotte Osterfield.

The details of his parents are yet to be revealed. Harrison is a British as per his nationality and regarding his ethnicity, he is a Caucasian White.

Osterfield attended Caterham School where he enrolled in the drama club and starred in school plays which inspired him to pursue acting as a full-time career. Later, he joined BRIT School where he first met Tom Holland. He studied at the London Academy of Music and Dramatic Art.

Harrison Osterfield made his acting debut in 2014 in short film, Trepidation. After a year, he appeared in two short films, Supply and Demand, and Colours.

However, Osterfield got his breakthrough in 2017 when he offered to a s sist Tom Holland in Spider-Man: Homecoming starring Michael Keaton, Jon Favreau,  Zendaya, Donald Glover.

Osterfield again a s sisted Holland in 2018 film, Avengers: Infinity War. In 2019, he will be seen in two projects, Catch-22, a miniseries and Chaos Walking, as an a s sistant to Tom.

Harrison Osterfield's Net Worth And Earnings

Harrison Osterfield is a rising Hollywood actor who is best known for a s sisting Tom Holland in Spider-Man: Homecoming and Avengers: Infinity War. The average salary of celebrities personal a s sistant is $80k+ but he might earn more than the average figure.

Harrison has worked in a few projects but which are pretty enough to recognize his acting talent. His net worth is believed to be around $0.5 million, as of 2019.

Harrison Osterfield is possibly single at the moment as there is no news of him dating someone or having a girlfriend. He is quite ambitious and hardworking which might be the reason, he always prioritizes his work than anything else.

He is an avid dog lover and has a dog named Monty.

Osterfield has a huge number of fan following on Instagram as he has 658.4k+ followers as of 2019 where he gives his personal and professional updates.

Below we present the video of Harrison Osterfield;