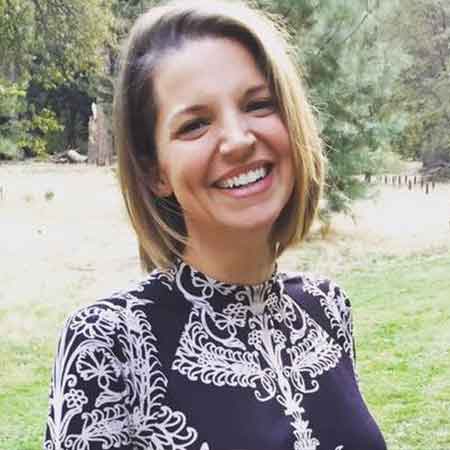 Hallie Gnatovich is an American therapist and former actress who was cast in the film Archer House(2007). From 2007 to 2012, she worked as a researcher in the paranormal investigation reality series Destination Truth, which aired on the SyFy Channel.

Aside from an on-screen career, Gnatovich is famous as the wife of TV presenter & producer Josh Gates, with whom she shares 2 children. Since leaving her on-screen career, she runs her own counseling business called Hallie G. Therapy. She is a licensed marriage/family therapist and helps people who are suffering from mental problems.

Hallie Gnatovich was born on 26 January 1981, in Boston, in the United States of America to Rock Gnatovich and Stana Gnatovich. He was raised along with her two siblings: both of them are brothers. One of her brother's names is Steven while the second one has preferred him as Simongnat on his IG account. She belongs to American nationality and regarding her ethnicity she is a White American.

Gnatovich attended Oberlin College from 2000 to 2004. She graduated with a BA in Theater.

Following her graduation, Gnatovich went on to study at the Alliant International University and graduated with a Masters's degree in Marriage and Family Therapy/Counselling. In 2010, she obtained her degree. Hallie acquired her passion for therapy from her mother, who worked as a therapist in Boston.

Hallie Gnatovich began her career as an actress & made her on-screen debut in 2007, portraying Marnie in the short-film Archer House alongside Riley Rose Critchlow, Tawny Bell, and Troian Bellisario.

Then, from 2007 to 2012, she appeared as the cast member, a researcher, in the paranormal reality TV series Destination Truth; it premiered on June 6, 2007, on SyFy Channel. Her husband Josh Gates was the co-executive producer of the TV series.

Since leaving her on-screen career, Hallie is working as a therapist, and as of now, she owns her own counseling firm called Hallie G. Therapy which is located in West Hollywood, California.

In the year 2009,  Gnatovich started working at Jeneese Center as Therapists. In 2011, she joined the Jewish Family Center where she worked for more than a year.

Apart from this, Gnatovich since 2008 has been working as a consultant for MedAvante-ProPhase intended at serving technology-enabled signal detection solutions in clinical trials of treatments for the Central Nervous System (CNS).

As per her corporate website www.halliegtherapy.com, Hallie first explores the client's background, thoughts, and beliefs that help her to cope up with them and develop new routines. She charges between $125-$150 per session.

How Much is Hallie Gnatovich's Net Worth & Salary?

Hallie Gnatovich has accumulated a good sum of money from her career as a therapist and an actress. As of early 2021, Gnatovich has a net worth of $1 million.

Her husband Josh Gates being a famous television personality, a producer has a net worth of $3 million in 2021. His annual salary is $100,000 with a monthly income of $8,000 and a weekly income of around $2k.

Besides, Josh also authored a book called Destination Truth: Memoirs of a Monster Hunter on October 11, 2011. It is priced $12.99 for Kindle and $11.84 for Paperback on his Amazon.

The Couple Has a House In LA

Sources reports, the two have a house in West Hollywood, Los Angeles. Though they have yet to disclose the financial details of their house, the average price of the mansion in LA is $800k as of 2020.

Hallie Gnatovich is happily married to her longtime boyfriend, Josh Gates. The couple got married on the 13th of September 2014 in a private wedding ceremony held at the Hidden Pond luxury resort in Kennebunkport, York, Maine. The wedding was attended by their family and close friends.

Neither Hallie nor her spouse Josh has revealed how their love story started.

Her husband Gates shared the news of their marriage to fans on his Facebook and Twitter page posting a photo of a car with the Just Married sign.

The couple welcomed a child, a son named Owen Gates on February 12, 2016. Since their marriage, they maintain a smooth relationship and it has been nearly a half-decade that the two are still going so strong in their own way.

As of now, they are enjoying their happy married life together. It was also reported that the couple was expecting their second child in early 2018 & welcomed daughter Isla. They currently live in West Hollywood, LA, California with their two kids.

Who Is Josh Gates?

Hallie Gnatovich uses Instagram (@halliegnatovich) & has over 3.4K followers as of early 2021. Her Twitter account with the handle @AGirlWhoListens had over 2K followers, though, is not active on the platform.