Giovani ‘Gio’ Benitez, an American broadcast journalist, is known for working at ABC News. He appears in various shows on ABC including Good Morning America, World News Tonight, 20/20, and Nightline. He also hosts the Fusion version of Nightline and has won two Emmy Awards. He has been married to Tommy DiDario since 2016. The couple became engaged on September 17, 2015, in Paris. Their wedding ceremony was held on April 16, 2017, in Miami.

Gio Benitez, an award-winning reporter, has covered a wide range of stories for the ABC network including Mexican Prison, Boston Marathon bombing, and Pulse nightclub shooting.

Gio Benitez was born on October 29, 1985, in Miami, Florida, U.S, under the birth sign Scorpio. He was born to Cuban parents. Benitez is an American citizen with a mixed descent of Spanish and Cuban.

He enrolled at Miami Coral Park High School and graduated in 2004. Then, he completed a Bachelor of Arts in Anthropology and Sociology at the Florida International University. Benitez is fluent in both English and Spanish languages.

Gio Benitez started his journalism career in 2009 when he became a reporter for WFOR, the CBS-owned TV based in Miami. In that year, he became the first reporter to shoot a TV story entirely with an iPhone.  He worked for almost five years there and moved to ABC network in 2013.

During his tenure with WFOR, he covered the 2012 Presidential election and reported extensively on the Trayvon Martin case. After joining ABC News in 2013, he has contributed to numerous shows including World News Tonight with David Muir, Nightline, and 20/20.

Gio Benitez was born and raised in Miami. He is fluent in English and Spanish. He had attended Florida International University’s School of International and Public Affairs. He is a graduate with a degree in sociology and anthropology from the University.

Gio Benitez has his grandparents as his childhood hero. According to him, he is inspired by their courage and journey as they sacrificed and risked everything to escape from the cruel grip of communists in Cuba.

Gio loves eating peanut butter and chocolate. It is his favorite guilty pleasure. Gio also tells if he had not been a reporter, he would have been either a movie director or a TV weatherman. He had started in the news business at CBS4, WFOR Television as an intern when he was just 17, for Coral Park High School.

In WFOR Network, he has covered a wide range of stories including relief efforts in Haiti, which had experienced the devastating earthquake in 2010, and the Trayvon Martin case as well.

He is a great lover of techno gadgets. As per his love and a new taste in the news reporting using such gadgets, he became the first television reporter reporting the release of Apple’s iPhone in 2009 using the device.

Before becoming a reporter, Benitez was an investigative producer at WFOR and worked on stories involving Medicare fraud, public safety, and government corruption. He started at the station as an Emma L. Bowen Foundation work-study scholar. His first on-air job was actually on the radio, on the nationally syndicated consumer electronics show, Into Tomorrow with Dave Graveline.

Gio Benitez is an ABC News correspondent and host of Fusion's edition of "Nightline" based in New York. He reports for all ABC News programs and platforms including "Good Morning America," "World News Tonight with David Muir," "Nightline" and "20/20."

Gio Benitez's Net Worth, And Salary

Gio Benitez’s net worth is $4 million at present. He earns a huge salary from ABC News. According to a source, ABC’s news anchor receives annually $75K.  Benitez's co-anchor, David Muir has $7 million.

The innovative storytelling and how he used the device caught the eyes of many of his viewers and was widely admired and appreciated for his effort. In 2013, Gio joined ABC Network and is currently on the team.

Very talented and hardworking with dynamic storytelling ability, Gio Benitez has received two regional Emmy Awards and is an eight-time nominee. Mostly, he is noted for his reporting in the investigative series on alleged police brutality which resulted in turning in the guns and badges of two of the Miami Police Officers.

Gio Benitez is a married man. He is married to Tommy DiDario since 2016. The gay reporter Benitez and his boyfriend Tommy Didario engaged on September 17, 2015. Benitez popped out a question with her in the Eiffel Tower, Paris. The duo got married on April 16, 2016. The two organized their wedding ceremony in Miami, Florida.

Benitez and Didario dated eight months before getting engaged to each other. The couple is sharing a wonderful married life together for a long time without any divorce rumor. Benitez frequently shares beautiful photos with his spouse Tommy DiDario to his Instagram account.

Previously, the media personality was allegedly in a relationship with ABC co-anchor David Muir. Some sources claim that David Muir is rumoredly gay, but he has not accepted this rumor.

Gio Benitez is a hot, sexy, and very handsome reporter that the News Network has today. His fans go crazy looking at his pictures where one can even notice his shirtless photos. He stands at a good height with great muscular appearances. 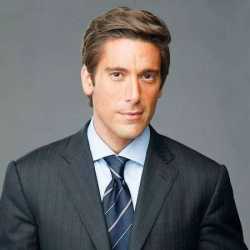