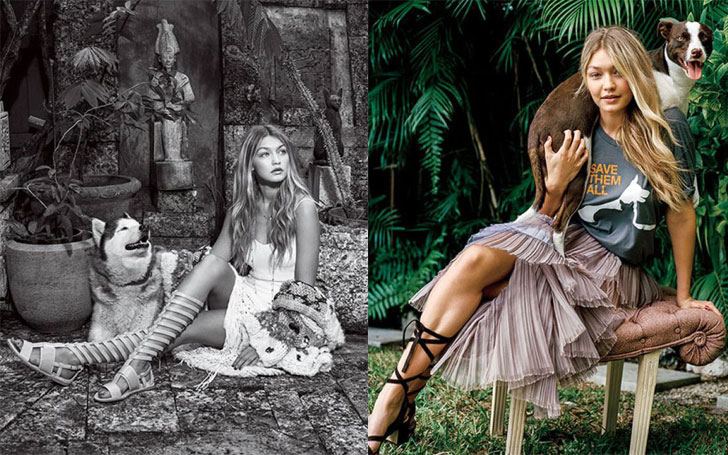 Gigi Hadid is an American model and emerging talent of acting famous for her relationship with a British singer Zayn Malik. The 22-year-young model is no doubt a mankind lover but along with it, she is a passionate lover of pets; especially doggies.

Gigi loves to spend her free times with the puppies and she was recently spotting taking a walk with her boyfriend Zayn Malik's French bulldog. Put up with us to know more about the story.

Well, the greatly admired American supermodel Gigi has been a passionate pet lover since her childhood. If we peek on her lifestyle since her early childhood, we can find her spending most of her free time with her puppy.

"On my 9th birthday, an angel came into my life... And on my 20th birthday, that same angel went to a place where he can watch over me a lot better..  To an irreplaceable companion, Rest In Peace my Angel Boy," Gigi wrote on a collaged picture of her and her pup."

Now, two years later, she again has got a pet which she loves greatly. This time the dog belongs to her boyfriend Zayn Malik. It's a Franch Bulldog with which she loves to spend her time even more than her partner when she stays at home.

On Wednesday, 14th June, Gigi was spotted indulging her time with the French bulldog as she carried him around Tompkins Square Park in New York City. The Victoria Secret Model appeared in a shiny black cropped yoga pant and a black sweatshirt.

Gigi Hadid with her puppy walking around the park

She almost carried him throughout her walking in the park, which made the dog indicate his master that he wanna walk on his foot. And she let him go on his foot and roam around the ground.

The emerging American model Gigi made a number of linkups in her early years. After going through the 4 or five relations, she found her Mr. Perfect possibly. She began her relationship with her current boyfriend Zayn since the November 2015.

On spending over two years of time together, they have taken their relationship to another level as they have already started to live together. However, they are still waiting for the good day to get hitched.

As per Gigi's to be stepmother Shiva Safai, they are having a good relationship together and are devoted to building a strong life together. Shiva told in an exclusive interview with E! News, what they want is the happiness of their daughter. As long as she is happy with her relation, there is no worry for the parents.

happy birthday to my everything

From the way they look at each other, the couple looks satisfied. After they started their relation, they have been spotted together in several places and in different functions. We wish them all the very best for the forthcoming future. For more gossips stay close to articlebio.